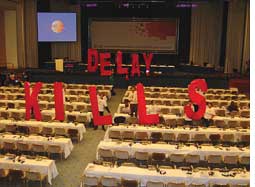 Lack of commitment at Bonn could dampen Copenhagen

THE second round of climate change talks in Bonn concluded a little after 5 in the evening on June 12. Twelve days of heated talks among representatives of 182 countries yielded very little developed countries were not ready to do anything. After much wrangle, 37 developing countries agreed on how much emission the developed countries should reduce after the first commitment period of the Kyoto Protocol ends in 2012. The developed countries are listed in Annex I of the protocol.

Of two ad hoc working groups one focussed specifically on emissions reduction targets of Annex I countries for second and third commitment periods under the protocol, and the second on long-term actions of all countries to address and adapt to climate change.

Far from any commitment to reduce emissions, the developed countries could not even agree on what the second commitment period should be. The Intergovernmental Panel on Climate Change has said developed countries should reduce emissions in the range of 25-40 per cent below 1990 levels by 2020. New studies say that much deeper cuts are required. But the current individual targets that a few developed countries have announced are way below 40 per cent. Japan, for example, announced a target during the meet, which translated into a mere 8 per cent reduction below 1990 levels by 2020. The country chose 2005 as its base year and not 1990, the standard for all UN negotiations. "This is not close to what Japan or any other developed country can or should do," said Yu Qingtai, lead negotiator from China.

Non-profits accused the US of not showing any real commitment. Jonathan Pershing, the US negotiator at Bonn, said countries like India and China should commit to emission cuts, though the outcome may not be binding. The US, however, did not commit to any reduction in its emissions.

The group of 130 developing countries known as G-77 and China also criticized Japan's targets. But this group came with its own set of problems that got exposed at the meet. The group was divided between small island states and some of the least developed countries as one and the rest as the other. The group could not come to a consensus on the emissions reduction target of Annex I countries for the second commitment period of Kyoto. Finally, China on behalf of 37 developing countries including India and several least developed countries, submitted a proposal to amend the protocol. It demanded Annex I countries reduce at least 40 per cent emissions below 1990 levels in the second commitment period of 2013-20.

It was crucial a proposal is tabled at the second Bonn meet because the Kyoto Protocol lays that any amendment must be communicated at least six months before it is proposed for adoption. Thus, to reach a decision at the Copenhagen Conference of Parties in December this year, a proposal by June was imperative. Yu acknowledged this was the first sign of progress since the Bali meet 18 months ago but it was certainly not enough because the developed countries resisted any meaningful discussion on their commitments and made very unfair demands of the developing countries. "The road ahead will not be easy," Yu added.


The chair of the second ad-hoc working group circulated a draft text among the countries. Its beginning was slow but the work picked up pace in the second week. So did words. The countries just focussed on getting their views included in the text, without any real negotiation. By the end of the meet the draft text was 200 pages, almost four times longer than the original. It comprised elements of the countries' vision for long-term cooperative action, mitigation, adaptation, finance and technology.

The text will be taken up for discussion in the third meet on climate change in Bonn from August 10-14. There is little hope for future meets unless "rich countries radically change their positions", said Tom Sharman, head of climate change, ActionAid, a non-profit.