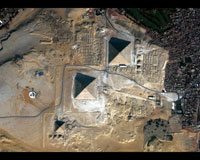 But they are far effective. The tinsel character had to battle snakes and Nazis to find the lost ancient Egyptian city of Tanis, while the University of Alabama Egyptologist pored over satellite images to uncover not just Tanis but 17 lost pyramids and thousands of tombs and settlements buried under an Egyptian floodplain.

With a grant from BBC, Parcak and her team spent more than a year studying NASA and commercial satellite imagery of Egypt’s Nile Valley Delta. When you walk the Egyptian floodplain, Parcak says, you can’t see much more than a brown, silty surface. But pictures from about 700 km above Earth show the chemical changes in the soil caused by the mud brick walls used to build the hidden houses and pyramids.

Parcak, however, stresses excavation or ground surveys still need to confirm their existence.