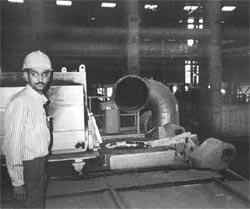 the agitation against Meta Strips United factory at Sancoale, Goa, has intensified with the Anti-Meta Strips Citizens Action Committee ( amcac ) issuing an ultimatum to the government for closing down the controversial project. amcac has decided to launch a 'civil disobedience movement' if the government fails to do so. This ultimatum came after the police prevented amcac from holding a demonstration against the project. The police stopped a rally of the amcac at Margao recently.

The Meta Strip plant, a 100 per cent export oriented copper recycling plant, which is being constructed under state police protection, is being opposed by environmentalists and the civil society because of its polluting nature.

To begin with, environmentalists say that the project started off in a wrong foot. The company, owned by Sushil Khaitan and promoted by the House of Jindals, tried its best to manipulate its way through different environmental clearances. The say that the plant design is outdated and does not adhere to safety norms for its toxic wastes (see Down To Earth , Vol 9, No 5).

Alleging that the police is hand-in-glove with their political bosses, speakers at a recent rally said that the state needed a political movement against the project. "The police have been terrorising the people at the behest of politicians even though it is the democratic right of citizens to raise their voices against injustice," said advocate Anacleto Viegas. Chief Minister Francisco Sardinha was criticised for not keeping his promise of closing down the factory, despite the fact that the inquiry commission had found the factory polluting.

On the other hand, project investors have started sending legal notices to agitators for compensation as the movement has affected their investment. Among those who have received the notice are environmentalists, villagers, union leaders and some media persons. Investors say that the factory had obtained all legal clearances and there was no protest when the construction work started on it.