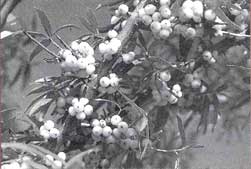 STARK mountainous desert areas need no longer wear dead white. The possibility of reclaiming areas like Ladakh and Lahaul and Spiti has materialised in the form of a tree called the seabuckthorn. Tenacious as a mountain goat, the shrub-tree is a blessing for the region: it checks soil erosion, yields fruit with a high vitamin content, provides fuel and fodder, and has medicinal and cosmetic value.

Although 3 species of this wonder tree are found in the country, their new-found appeal for Indians owes much to the Chinese, who have planted thousands of ha with seabuckthorn. "The plant has become the 'green hope' of the people in the cold, harsh areas of China," says Lu Rongsen of the Kathmandu-based International Centre for Integrated Mountain Development (ICIMOD), which is assisting efforts to popularise the species in India.

The ICIMOD and the Lahaul Potato Growers' Society (LPS) are helping the Shimla-based Himachal Pradesh's council for science, technology and environment in extending the area under seabuckthorn in the state. Says LPS managing director Bhagwan Singh, "We want fast propagation of soil stabilising seabuckthorn in Lahaul and Spiti as our top soil is eroding at a fast pace."

The council had organised a consultative meeting on seabuckthorn in March in association with the ICIMOD and the LPS to chalk out an action plan. Says ICIMOD director general Egbert Pelinck, "We are happy that the Himachal Pradesh government has realised the importance of seabuckthorn."
Fresh seabuckthorn plantations have started coming up in Lahaul and Spiti starting 1993. Plans are also afoot to include the propagation of the seabuckthorn in the Rs 40-crore social forestry project that is on the anvil in the Kullu-Mandi-Lahaul area with British aid.

Says J P Negi, former managing director of the Himachal Pradesh Horticultural Produce Marketing Corporation, "The total area in India where seabuckthorn can be propagated and regenerated is about 1,26,40,000 ha. The plant can be grown in 45 per cent of the geographical area of the states of Himachal Pradesh and Jammu and Kashmir."

Besides, says Singh, "We want to create an economy that has some sort of local sustenance. Lahaul and Spiti remains cut off from the rest of the country for 6-7 months a year. We want something to grow here that can not only meet our daily needs but has some kind of commercial value. Just the oil of seabuckthorn, obtained from its seeds, sells for as high as US $500 a kilo in the international market."

Singh says that seabuckthorn is not only cheaper to plant than other species such as poplar and willow, which are popular with the state forest department, it can also meet the fuelwood needs of the local people. Says Singh, "The government supplies 25,000 quintals of firewood to tribal regions to meet their fuelwood requirements. If they plant seabuckthorn in a big way they can save on that enormous subsidy."
Grown in cold, desert areas, the deciduous seabuckthorn, belonging to the genus Hippophae, has transformed the arid landscape near China's Mau Us desert. It is the only tree that could succeed in arresting the severe soil erosion in the region. Says Rongsen, "In the '60s, the local government tried to harness the land by planting poplar, elm and apricot, but the success rate was poor. Seabuckthorn has a success rate of 75 per cent even in a year of drought."

In a small watershed area in the Deshengxi township of Zhungar county, the planting of seabuckthorn increased the vegetation cover in the area from 20 to 61 per cent in 9 years, the level of soil erosion decreased from 40,000 tonnes per square km to 5,000 tonnes per square km, and the per capita grain yield increased from 160 kg to 373 kg. Most important, the per capita income of the locals increased from around US $11 to US $142 as a result of the land regenerated.

The yield of its leaves is higher than that of alfalfa (1,900 kg per ha), a fodder species, by 33 per cent. Research carried out by the Pingliang Institute for Animal Husbandry in Gansu Province even shows that the bush plant exceeds the nutrient content of improved fodder species such as red clover. Says Rongsen, "Local farmers grow seabuckthorn even as a fodder species because its yield doesn't depend so much on soil conditions. On the other hand, fodder grass species like alfalfa and red clover depend a lot on soil conditions."


Besides fuelwood and fodder uses, the plant has acquired a formidable reputation as a medicinal plant. The vitamin C content in seabuckthorn berries is 5-100 times higher than most fruits and vegetables. The fruit is rich in compounds known as flavonoids, which can be used to treat coronary heart disease and angina pectoris.

According to a clinical investigation of 303 patients in 7 hospitals of Beijing in 1992, the success rate of flavonoids in treating coronary disease and angina pectoris was 90.88 per cent. Experimental results by Chinese researchers reveal that seabuckthorn extracts can completely heal certain types of cancers. In fact, the many uses of the plant made it a natural choice for Russian astronauts going on extended trips in space.

The bush-tree has grown in importance with the knowledge that it could satisfy the long-term conservation needs as well as the short-term economic needs of the people. The plant can withstand temperatures below -60 0 C and some species can grow in regions with an annual precipitation as low as 300 mm. Besides, the plant has an extensive root system and nitrogen fixing properties. It is estimated that the nitrogen fixing capacity of a 3-year-old plant is 27 kg per ha and of a 13-16 year old plant, about 180 kg per ha.

When grown in rotation with crops such as flax and potato, seabuckthorn can substantially increase the former's yield. In China's Gansu Province, farmers dug out seabuckthorn bushes and grew flax. The flax yield reached 1,125-1,500 kg per ha, double the normal yield. The significance of its nitrogen fixing abilities can scarcely be lost on the cold, desert districts of India in Himachal Pradesh -- especially Lahaul and Spiti, where farmers grow seed potatoes. Like the Chinese, Indians may also start valuing the plant as a godsend.