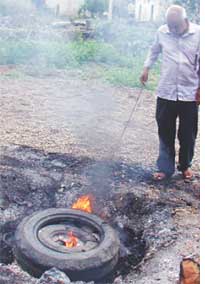 villagers in Maharashtra's Nanded district have a rain man in their midst. Raja Marathe, an alumni of iit -Bombay, claims to have developed an indigenous method of cloud seeding to induce artificial rains.

It is low cost--the raw materials required are discarded rubber tyres and common salt. Villagers whose crops Marathe saved vouch for his technique.

Marathe burns used tyres and sprinkles them with common salt. Rain follows within 24 to 96 hours, he claimed. Marathe explained that sodium chloride or common salt is hygroscopic (attracts moisture) and its particles act as cloud nuclei that condense vapour into water droplets. The burning tyres and wood provide the giant condensation nuclei (like carbon nano-tubes) needed to bind the water droplets together.

The smoke carries the cloud nuclei and giant condensation nuclei to the warm clouds found at a height of 900-1,500 metres. The nuclei induce rain, said Marathe. He has named his technique lavan vajra (meaning salt thunderbolt in Sanskrit).

Each lavan vajra experiment costs Rs 700 as against the Rs 15 lakh spent on cloud seeding by Mumbai municipality for a week in July-August to fill the water reservoirs in the city outskirts (see 'Desperate for Rains', Down To Earth, August 15, 2009). In this method, silver iodide is used to seed cold clouds found at a higher altitude of 4,500 metres. The chemical crystallizes water droplets that fall as hail or rain.

Santosh Deshmukh, a farmer of Sujlegaon village, said his soybean, cotton and jowar crop survived this year's drought because of lavan vajra. "The burning tyres and salt caused rains within a day," Deshmukh said. Umakant Deshpande, a farmer in Navandi village, said cloud seeding should be done on a larger scale.

The district administration has recognized Marathe's efforts and has sanctioned him Rs 1 lakh and two jeeps. Marathe has also submitted a proposal for cloud seeding with helicopters to make up for deficient rains in Nanded and Latur districts. (This method does not require burning tyres--chemicals are sprayed from a height.)

The two districts received only 35 per cent of normal rainfall this year as against 80 per cent in the rest of the Marathwada region. The project will cost Rs 12 lakh and then meteorological department's help will be needed to track the experiments, analyze data and review results, said Marathe.

Activists dubbed the experiments a political gimmick to garner votes during state legislature elections scheduled for October 13; Nanded is the home district of chief minister Ashok Chavan. Environmentalists said uncontrolled burning of tyres would cause pollution. Farmers said they don't care about the pollution if they can save their kharif crops.