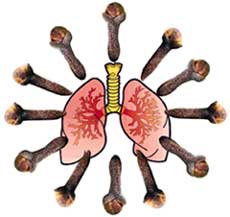 cloves, a commonly used spice, could do much more than flavour your food -- they could battle out lung cancer, according to a study by a research team from Kolkata's Chittaranjan National Cancer Institute.

The scientists found that cloves inhibit abnormal cell growth in lungs of mice. "We found that cloves drove the proliferating cells of abnormal shapes and sizes to commit mass suicide," says Suktaa Das, who led the research team. "Cloves even thwarted the progression of pre-malignant cells that threatened to initiate lung cancer in mice," she adds.

Lung cancer claims about one million lives every year all over the world. In India, cases of lung cancer are rising at an alarming rate. Many victims of lung cancer cannot afford chemotherapy due to its high cost. Some patients taking chemotherapy drop out due to side effects.To find an inexpensive and better remedy for lung cancer, the Kolkata team turned its attention to cloves, which had already shown activity against bacteria and viruses.

For their study, the researchers injected mice with benzopyrene, which is a cancer-causing agent found in tobacco and is a major risk factor for lung cancer. Then the mice were divided into two groups. One group that orally received a clove infusion prepared by soaking powdered cloves in distilled water was the treatment group and the other, that was only given distilled water, designated as controls. The results showed that mice treated with cloves had fewer abnormal cells in lung tissue compared to controls.

Clove also reduced the abnormal crowding of cells in particular regions of lung tissue and checked the growth of pre-malignant cells by more than 85 per cent. Furthermore, the study found that cloves revved up the levels of some proteins (called p53 and Bax) that triggered cell death and helped stop the generation of protein called Bcl-2 that fuels abnormal cell growth. Cloves also inhibited the action of cyclooxygenase-2, a key enzyme that initiates inflammation, which if left untreated could lead to malignancy.

"The studies with mice show that cloves could be the potential herbal remedy for lung cancer," says Das. The findings of the study will be published in a forthcoming issue of the journal Carcinogenesis.