Clue to save turtles 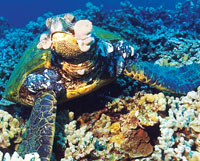 MARINE biologists had almost given up hope of saving the green sea turtle in the 1980s following an uptick in a tumourcausing disease among the endangered species. They thought the deadly condition might drive the largest hard-shelled sea turtle to extinction.

“But that did not happen for a variety of reasons, including the strenuous conservation and management efforts,” said Kyle S Van Houtan from the National Oceanic and Atmospheric Administration Fisheries Service (NOAAFS) at Hawaii in USA. The origin of the disease, fibropapillomatosis, however, could not be pinpointed. Of the various agents, evidence strongly suggests the herpesvirus caused the tumours.

In an effort to get a better handle on the disease, Houtan and his colleagues at NOAAFS investigated the deaths of nearly 4,000 turtles that washed up dead or moribund on Hawaii’s beaches between 1982 and 2009.

The researchers found most sick turtles were subadults that live in shallow coastal waters with lush seagrass meadows and feed on algae. “Certain locations, just 10 km apart, had remarkably different infection rates,” said lead researcher Houtan. This suggested the disease might have to do with the food turtles eat, he said.

Following the agricultural boom in the 1950s, invasive alien algae had replaced the native Hawaiian algae and seagrass in areas with rich agricultural runoff. Some algae, Hypnea musciformis and Ulva fasciata, had become so dominant that they formed over 90 per cent of the turtle’s diet in those areas. These algae sequester nitrogen from the fertiliser- rich agricultural runoff and synthesise a protein, arginine. The protein ruptures the immune system of turtles, while acting as a key building block of the herpesvirus’ protein coat, thus triggering the tumour disease.

But the rate at which the turtles contracted fibropapillomatosis was not consistent in the past three decades. The researchers compared the infection trend with the agricultural pattern across the archipelago in the past three decades. The outbreak was at its peak in the 1980s, but subsided towards the 1990s, coinciding with the general decline of sugarcane and pineapple agriculture across the islands.

Some regions of Oahu and Maui islands, which still have widespread cultivations, however, continued to show high infection rates, the researchers noted in the September 29 issue of PLoS One. Infection rate was low in Kona island where less land is under cultivation, the team noted.

Although the study is confined to Hawaii islands, the researchers said land use and human activities in different regions can be analysed to understand the infection rate among turtles. There are important green turtle nesting and feeding grounds along the coastline of India, particularly in the islands of Lakshadweep, Andaman and Nicobar, Gulf of Mannar and the costal areas of Gujarat, Karnataka and Kerala.

Though the disease is contagious, so far Indian green sea turtles have remained unaffected, assured B C Choudhury, scientist at the Wildlife Institute of India in Dehradun. This shows the Indian green turtles are not in contact with the fibropapillomatosis hot spots around the world.