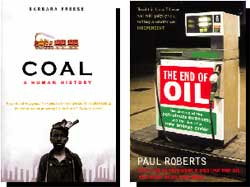 Coal A Human History by Barbara Freese Arrow Books London 2003; The End of Oil The decline of the petroleum economy and the rise of a new energy order by Paul Roberts, Bloomsbury London 2005.

Hydrocarbons define and powe our civilisation. Behind the massive changes that the world has seen in the past three or four centuries, lie massive seams of coal and oceans of oil. Surprisingly, and rather unfortunately, very little attention has been focused on the role of hydrocarbons in our society. There is a lot of technical literature on coal and petroleum but very little to understand the social impact of the use of these hydrocarbons, other than perhaps activist literature against the omissions and commissions of the oil industry.

It's only in the last few years that people have started looking seriously at these issues.Most of these have been influenced by the "Peak Oil" theory and have been fuelled in recent years by the wars over oil and the sharp rise in oil prices. There have been few attempts to study the manner in which hydrocarbons and their derivatives have become an integral part of our daily lives, silently powering our ideas and ideologies.

The two books under review attempt to do just that. Barbara Freese's is an excellent social history of coal its emergence as a fuel of importance in late medieval Europe (mainly England), the manner in which it impacted on the industrial revolution, how it changed urban landscapes, lifestyles, working conditions, conduct of warfare and how it continues to underwrite much of modern life--despite the abdication of "King Coal" in favour of oil. The range and scope of her work is quite impressive as she straddles the globe with wide and varied themes. Freese does all this without falling into the trap of technological determinism.

Paul Roberts's is a much more ambitious attempt. Through his detailed examination of the role oil plays in our lives, Roberts attempts to show how deep our collective addiction is to this non renewable resource and how difficult it will be to make transition to a non-hydrocarbon economy. He also explains why it has become so difficult for governments to bring in policies which reduce the role of oil in our life. Roberts successfully manages to argue that it is not only the much-maligned oil companies and geo-politics of the superpowers, but the very fabric of our daily lives which makes it very difficult to move beyond petroleum--and hydrocarbons at a more general level.

Roberts, and to a lesser extent Freese, implicate all of us--oil company executives, environmental activists, government players, political rebels, armchair academics, industrialists, consumers, everyone--within the hydrocarbon economy and make it impossible for anyone to shift blame and responsibility to others.
It is not only the cars and buses and airplanes which will be affected once the Earth's oil reserves run out (though that in itself can disrupt the entire structure of modern life), but electricity generation, agriculture, medicine and a myriad other activities.

Consider today's agriculture not only is the fertiliser and pesticide derived from petroleum and natural gas, water is pumped and farm inputs and labour transported to the field with the help of coal or oil. This food in turn reaches consumers with the help of further hydrocarbon use. One doesn't have to be a Malthusian to say what the depletion of hydrocarbons would do to human society.

A study in the us in the 1970s had shown that one calorie of hydrocarbon energy was used to generate a calorie of food. With increased mechanisation of farming activities and the food chain, dependence on hydrocarbons has increased manifold.

It is not just agriculture. Oil and its derivatives surround us at every moment of our lives. Just take five minutes right now and list all the plastic you can see near your surroundings pens and watches, laptops, phones, kitchen utensils and shoes, the list is practically endless. Similar is the list for medicines and other uses of oil (and coal).


The reason behind use of hydrocarbons becoming so widespread is quite well known coal and oil are basically huge stores of ancient solar energy compressed into a relatively small volume. Scientists often express it as energy production ratio (epr). This measures how much energy is returned compared to the energy invested or energy output / energy input. For human society to survive it was essential to find and harness energy sources where the epr was higher than 1. Prior to the discovery of coal, and later oil, the only way in which solar power could be harnessed was through agriculture and other primary production which converted the sun's energy into food and other products like wood and fodder. There was also the conversion of solar power through windmills and of hydropower though water mills. But the epr in all these ranged between 1.1 to 1.2.

Coal, with its epr above 1.5 even for the worst varieties, was a quantum jump in the energy surplus it provided. It was highly portable and so could fire the industrial revolution. Oil, which was discovered and brought into use only after the consolidation of the coal driven industrial revolution, had a base epr of 2 and above. Some estimations state that energy equivalent to only one barrel of oil was needed to bring a 100 barrels of this wondrous liquid to the consumer when petroleum was first drilled in Saudi Arabia.


But it was not merely this wondrous physical property which enabled coal and oil to fuel the industrialised society. It also required a smart sleight of hand by the market and its priests, the economists, to make hydrocarbons so inexpensive. The miracle of the market is the price it puts on each commodity that comes into its domain. This price, we are told, determines the value society puts on that commodity while at the same time covering the cost of its production. While this is true of most commodities, such a pricing mechanism fails for non-renewable commodities like coal and oil. Each kg of coal or each litre of oil which is burnt is irreplaceable, non-renewable. The fact that the Earth's contained about 2 trillion barrels of oil produced a delusion of infinity and enabled the cheap pricing of these crucial commodities. 'Production' of coal or oil is calculated only on the basis of how much can be brought to the market at any given time. But non-renewable products are, in that sense, priceless since once used it can never be got back.

When the consumption of hydrocarbon commodities was much below the total reserves, this illusion of infinity and consequent low prices could be kept intact. But today when we have consumed almost half the total oil inside the Earth and such illusions are increasingly turning into nightmares. The present world is so completely dependent on oil that it is practically impossible to shift to another, equally powerful yet inexpensive, energy source. This is the basis for the strong political consensus, across countries and ideologies, on keeping oil prices low. As the demand for hydrocarbons keeps spiralling and the political compulsions keep prices low, we will continue to use up the remaining reserves at ever faster rates, making the eventual shift to a non-hydrocarbon economy that much more traumatic and difficult.

The normal answer for anent to the use of (cheap) oil is to point to alternative sources of energy. Unfortunately, this belief that science and technology will find us deliverance is akin to religious belief in spiritual deliverance. At present there is no viable alternative energy source. Hydrogen, the much touted saviour, actually has an epr lower than 1 when used as a fuel; as do many other alternatives like biodiesel and, perhaps, even nuclear, which in any case is extremely hazardous and equally non-renewable. Only wind energy has a high epr. But almost all these alternative sources of energy are only for electricity which cannot be easily stored nor is it portable like coal or oil. Even if one can imagine land transport based on electricity, planes cannot fly without oil, nor can electricity produce the fertilisers, plastics and other products which oil provides us. To still believe that technology will find some solution, is to be delusional.

This is precisely why books like these are essential readings for every citizen of this planet today. Unless we diagnose and unravel the ways in which we have imbricated hydrocarbons into our very existence, it would be near impossible to work towards a post-carbon economy and social order. The question is not if oil ends, but when will oil end and how will we deal with the necessary transition to a non-oil age.