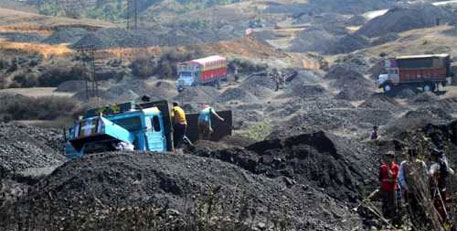 With the fate of 218 coal blocks hanging fire after the Supreme Court passed a judgement deeming the coal block allocations as illegal, the Attorney General for Union government, Mukul Rohatgi, on Monday sought exemption for 46 coal blocks from possible revocation of licence. Rohtagi said the coal blocks should not be taken back from the companies that operate them as they are already under production.

Rohatgi also told the Court during the hearing that the government was open to re-auctioning the coal blocks if their allocations are revoked. On August 25, the Supreme Court ruled that the coal allocations made between 1993 and 2010 were arbitrary and casual, violating several provisions of mining laws in the country.

Earlier in 2012, the Comptroller Auditor General of India stated in an audit report that the state exchequer lost Rs 1.86 lakh crore due to these arbitrary coal block allocations, mostly made to private power, cement and mining companies. Following this report by the CAG, a slew of petitions contested the coal block allocations, accusing the government for granting largesse to the private companies. On August 25, the apex court upheld the contention of the petitioners.

The next hearing is on September 9. The apex court bench headed by Justice R M Lodha has asked all the stakeholders, including power producer associations, sponge iron associations and state governments to file affidavits to suggest a way out of the deadlock over the controversial coal block allocations.

For the sake of averting power crisis

According to the arguments forwarded by the attorney general, some of the major industries such as Jindal Steel and Power Limited, Hindalco Industries Limited and Sesa Sterlite Limited are some of the firms that have already spent heavily on steel and power plants based around the coal blocks. Rohatgi further stated that the cancellation of the coal blocks might lead to power crisis as some of these mines are already operational and supplying electricity to various states.

The attorney general also told that the court that the government is in favour of a bidding process for all the coal blocks named in the case, now facing de-allocation. According to a source in the Union Ministry of Coal, the government has formulated a policy to auction the coal blocks, which were arbitrarily allocated to major power, iron steel and cement companies.

Don't spare anyone: Common Cause

On the other hand, the petitioners in the case, Common Cause, a Delhi non-profit working on the issues relating to corruption and natural resources, represented by Supreme Court advocate Prashant Bhushan, submitted a note to the court. It stated that the since the illegality of the allocation was already established in the earlier hearing on August 25, the coal blocks should be cancelled immediately. Bhushan stated in the note that if government is willing to auction the said coal blocks, the present owners can be given a chance to match the winning bid. Bhushan stated in the note that only 7 percent of the coal blocks are producing coal from the allocation made between 1993 and 2010. The total allocated coal amounts to 44 billion tonnes.