Indian crews successfully contained a huge oil spill near the Great Nicobar island. Now, the ministry of environment and forests must assess the damage to the island chain's ecology. 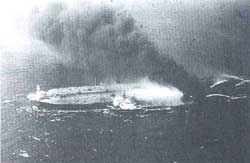 WITHIN hours of being alerted by a French news agency about the worst-ever oil spill in Indian waters, a government crisis control group was huddled in emergency session. Their major concern: how best to contain oil leaking in a steady flow from a ruptured tank of the blazing, Tokyo-bound supertanker Maersk Navigator.

The huge tanker, with its cavernous tanks bulging with 250,000 tonnes of crude, collided with another tanker at 1 am on January 22 on the busy sealane in the Strait of Malacca. One tank of the Maersk Navigator caught fire, prompting the 24-member crew to immediately abandon ship. The other tanker, Sanko Anna, was empty and its crew also escaped injury.

The crisis control group, consisting of officials from the Coast Guard (CG), the ministry of environment and forests (MEF) and the department of ocean development (DOD), ordered a support ship and a reconnaissance plane to set out from Port Blair in the Andamans to the accident site, 122 km south-east of the Great Nicobar Island in the Bay of Bengal. Pollution control gear was taken aboard a ship, which steamed from Madras the same day for Great Nicobar. Commodore J F Carmeiro, who heads the Coast Guard's eastern region, was put in charge of the whole operation.

The ship from Madras, Vikram, reached the stricken tanker the next day and immediately began spraying chemical dispersants on the slick, which by then was just 18 km from the southern tip, called Indira Point, of Great Nicobar. Maersk Navigator, meanwhile, had been towed by seven tugs despatched by the tanker owner, A P Moller (Singapore) Pte Ltd, toward Indira Point. Vikram was joined a day later by another ship and two Dornier aircraft, in spraying the spill. Simultaneously, Carmeiro ordered the tanker be towed south, away from the island, so as to reduce the threat to Great Nicobar.

On January 25, the tugs doused the fire aboard Maersk Navigator with foam, but the tanker continued to leak oil until repair crews from the tugs were able to seal the hull on January 31. By then, the tanker was estimated to have leaked 40,000 tonnes of crude.

From January 23, CG crews worked on dissipating the oil spill, using two ships initially and a third that reached the slick on January 28. The two Dornier aircraft also flew spraying sorties. In six days, they eliminated the bulk of the spilt oil.

Meanwhile, Sagarkanya, owned by the National Institute of Oceanography (NIO), arrived at the spill site and began a detailed scientific study of the collision. The NIO study is expected to be ready early in March.

The total lack of any international assistance in cleaning up the Maersk Navigator spill, except for the seven tugs despatched by the tanker's owner, prompted Union minister of state for environment Kamal Nath to remark the international community had belied the spirit of the biodiversity convention signed last year at the Earth Summit at Rio (See box).

The Coast Guard director-general, Vice-Admiral K K Kohli, explained, "We could not afford to wait for help and went ahead on our own to protect our exclusive economic zone, which would have, otherwise, been badly affected."

The work of the CG was closely monitored by international agencies, including the International Tanker Owners Pollution Federation (ITOPF), a London-based technical advisory group. ITOPF technical manager Joe Nichols told Down To Earth: "The Coast Guard did a very good job. I think they were very effective and prompt."

Meanwhile, in New Delhi, the first signs of a controversy over using dispersants are visible (See box).

As for compensation, the CG and MEF have to send their separate claims to the Director-General of Shipping, who will then forward a consolidated statement to the International Oil Pollution Compensation Fund in London, which handles payouts. As India is a signatory to the International Maritime Pollution Convention, it is entitled to compensation of US $82.5 million, the normal amount available in such a case. Explained Nichols, "The first $18 million is paid by the ship-owners and the rest will come from the fund."

Meanwhile, Indonesia and Malaysia suggest traffic through the extremely crowded Strait of Malacca should be regulated by levying a toll on all ships passing through it. The money raised would be used to pay for better navigational and safety equipment.