Code of conduct for space 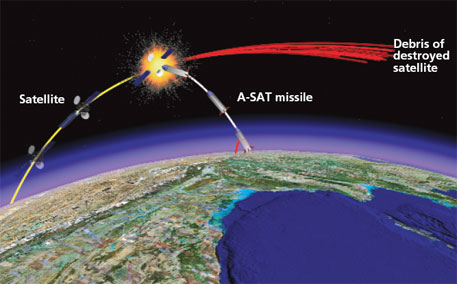 IN October, when the peaceful use of space will be discussed at the 67th UN General Assembly in New York, the European Union will launch negotiations to get countries on board to sign a new International Code of Conduct for Outer Space Activities.

The draft, an improved version of the norms first set in 2008, lays down regulations for countries that send space missions. The need for such regulations was felt in 2007 when China conducted an anti-satellite test to destroy its defunct weather satellite. The US and Russia had conducted similar tests in the 1980s. Experts cautioned that this could lead to countries targeting each others’ satellites in future. According to the US Department of Defense, there are 22,000 objects in orbit and 1,100 of these are active satellites. Current space laws, which consist of a few legally binding and non-legally binding treaties, are inadequate to tackle problems such as debris and weaponisation of space. EU hopes that all major nations will sign the document by 2013. But are they willing?

India has never disclosed its official stand. But speaking to Down To Earth, D Balavenkatesh Varma, joint secretary in the disarmament and international security division of the Union Ministry of External Affairs, says, “We support a code but it should be legally binding.” The compliance to the draft is currently voluntary. Ajey Lele, space security expert at the Institute of Defence Studies and Analysis in Delhi, says some of the space treaties have been rendered useless because few countries have signed them. For example, the US, Russia and China are not party to the Moon Agreement, which prohibits use of the Moon for non-peaceful purposes. “The Western world does not want a legally binding treaty because they know if they violate it, which they are likely to, they will have to bear punishments,” adds Rajeswari Rajagopalan, senior research fellow at Observer Research Foundation who specialises in space and military issues.

There are other bones of contention as well. Rajagopalan points out that Article 8.1 of the draft, which makes it mandatory for countries to share space policies and defence strategies, will be a problem. “Countries use space assets to secure themselves. It will be naive to assume they will be divulging information,” she adds. For countries like India, a major concern is that the codes do not restrict space activity. “It is a lot like the debate on climate change,” says Rajagopalan. “The developed world contributed to the carbon problem initially and then when the developing world stepped up its consumption of fossil fuels, they were asked to keep tabs on it.” The draft also suffers from a fundamental problem. EU did not involve major spacefaring countries while outlining the codes. Space giant US came into the picture only earlier this year when its secretary of state Hillary Clinton offered EU full assistance. “EU says it wanted to reach consensus among its member countries first,” says Rajagopalan. “This is no excuse. Involving other countries would have given them a sense of ownership to the code and saved time on revisions,” she adds.

China and Russia have their own codes. “The nations can point at the substantive gaps in the EU code with reference to some provisions of their own. For example, the code fails to address space-based weapons that can target sites on Earth,” says K R Murthi, vice-president of the International Institute of Space Law in France.