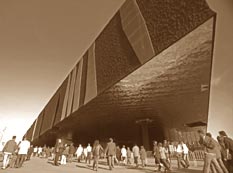 The new mirror-glass triangular block built for the Universal Forum of Cultures in Barcelona is supposed to provide "a new creative space for reflection and experimentation in relation to the main cultural and social conflicts humanity is facing." Sponsoring this "space" are multinationals such as Randstad, the Dutch staff contracting group; Hines, the us real estate developer; Indra, the Spanish weapons maker; General Electric, Coca Cola and Nestle.

Peace, cultural diversity and sustainable development are the themes of the forum, which is being organised by Spanish government institutions. But critics allege that the forum is crass commercialism.

Entry to the events, which include about 1,500 performances and cultural shows, costs us $25. Entry to 45 conferences ranges from us $35 to us $535. The forum is definitely not open to all.

Posters attacking the forum are pasted around Barcelona. Noam Chomsky and Naomi Klein are among the intellectuals who have refused invites. Several non-governmental organisations withdrew on the grounds that the forum talks of peace but its sponsors are making money from the Iraq war. The La Caixa bank, one of the forum's funders, is involved in reconstruction projects in Iraq.

The theme is sustainable development, but Endesa, a company helping in constructing the venue, is the fourth biggest carbon dioxide polluter in Europe. The Spanish Anthropological Association called the forum a masquerade of cultural diversity. The forum is becoming "a circus in which diversity will be exhibited as a grand and wonderful show of light and colour," says anthropologist Manuel Delgado.