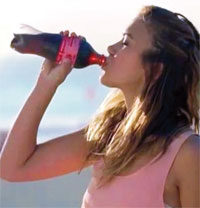 Greenpeace has accused an Australian network of caving under pressure from beverage giant Coca-Cola after it banned a controversial ad supporting a national recycling scheme.

The ad shows people drinking Coca-Cola from plastic bottles followed by images of dead birds falling from the sky. It highlights how sea birds often mistake shiny plastic floating in the ocean for food, which leads to their death. The ad aims to promote legislation for a scheme under which companies will have to refund customers 10 cents for every bottle or can they return for recycling. Greenpeace claims Coca-Cola and other beverage makers are lobbying against the legislation.

In response, Channel Nine defended their decision to remove the ad: “We had no issue in taking the original booking from Greenpeace but on reviewing the content we deemed it to be offensive to our viewers and so advised the client we would not proceed with it.”