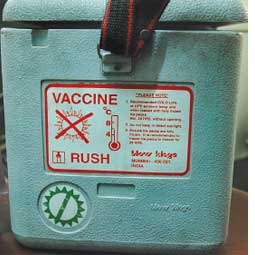 World Health Organization estimates the maintenance of vaccines costs US $200 per year. From the making to the point of administration, vaccines require freezing temperatures for stability. Sustaining the cold chain needs a continuous supply of electricity; costs rise 14 per cent. “20 per cent children in developing countries with Hib meningitis. The percentage is higher in Africa and Asia owing to lack of infrastructure,” said Robert Couch, professor of molecular virology and microbiology at the Baylor College of Medicine in usa.

What developing countries need are vaccines delivered in a backpack on a bike to remote villages. Now distribution requires a clinic, a nurse, a refrigerator, electricity supply, and refrigeration lorries, said Matthew Cottingham, scientist from the UK’s University of Oxford.

In a study published by Science Translational Medicine on January 17, Cottingham’s team described a simple way by which viral vaccines could be stored at room temperatures. Scaled to industrial levels, the backpack dream could come true.

When virus particles are suspended in liquids to constitute a vaccine, chemical reactions degrade the virus. Costly technologies like spray drying and lyophilization (freezing) are employed to prevent it. The team used sugars—common stabilizing agents—instead.

The researchers mixed each of two vaccines (human adenovirus and pox virus) with a mixture of two sugars—sucrose and trehalose—and dehydrated them on a simple membrane. The sugars dried into something like a glass film preserving the vaccines. They were stored for four months at 45°C without any degradation: the virus remained embedded in the film much like flies in amber. The membrane could be flushed with water to rehydrate the vaccine.

“This is exciting because these viruses are fragile. If we were able to stabilize them, other vaccines should be easier,” said Adrian Hill, a study member. “We have done this work at the laboratory scale. To make it into a product, we will have to increase the scale while adhering to guidelines that ensure safety,” added Christine Rollier, another member.

“Pharmaceutical and biotechnology companies have expressed their desire to license this technology,” said Sam de Costa from the Nova Laboratories Limited, in the UK, which partnered Oxford University in the venture.