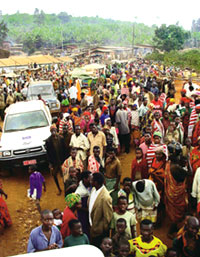 With Burundi, a small east African country, emerging from a 13-year-long civil war, more than 400,000 refugees have started returning home. Its newly elected government now faces the daunting task of land allocation, which could plunge the country back into civil war.

Burundi experienced a mass exodus in 1972, following a decade of ethnic violence between its minority Tutsi and majority Hutu community. Later in 1993, after the assassination of the country's first democratically elected Hutu president, Melchior Ndadaye, the country plunged into another vicious civil war.

On September 7, 2006, the country's last active rebel group, the Forces Nationals de Liberation, agreed a ceasefire with the current government that got elected in August 2005.

The negotiations to end the country's civil war has sparked hope among hundreds and thousands of Burundians, who had fled the country during ethnic violence and taken shelters in neighbouring countries like Tanzania, the Democratic Republic Congo and Rwanda. Their return home is imminent as Tanzania, host to most of the refugees, has begun expelling them since October. The Tanzanian government says the refugees and their livestock are causing a "serious environmental problem".

Since 2002, about 319,000 refugees have been repatriated to Burundi and the rest are preparing for home-coming. This is, however, leading to serious conflicts between them and the current occupiers of land.

According to Burundi's land law, legal title reverts to whoever occupies land for at least 30 years if no claims are made within three years. This law has been applied in the cases of people exiled in 1972, who have now returned. The previous government had given legal titles to current occupants, which cannot be overruled by the government now in power.

But the refugees, now back home, argue that they did not leave their land on their own accord and were unable to return, and therefore should not be subject to the law.

In July 2006, the current government set up the Commission Nationale des Terres et Autre Bien (cntb) to deal with these land and property disputes.

The commission has been given a three-year period to sort out the problem. But in a media statement, president of cntb, Father Aster Kana, said he could not predict how long it would take to deal with all the current cases as well as those that could arise during that period.

The current measures will, however, come as extremely cold comfort to those who are now homeless.