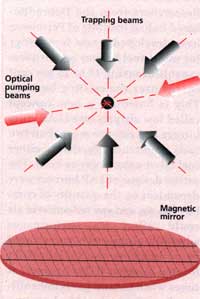 A NOVEL technique for storing and studying cold atoms using audio tapes and floppy disks has recently been developed. E Hinds and his colleagues at Yale University, US, have reported creating a magneto-optic trap alongwith a magnetic mirror, with which they have managed to trap rubidium atoms (Physical Review Letters, 75, 1995, and Nature, Vol 377, September 28, 1995).

Non-uniform magnetic fields have been used to deflect atoms for ages. The magnetic moment of the atom interacts with the magnetic field producing a deflection. Ordinary methods produce a very slight deflection. To get a larger deflection, strongly varying magnetic fields and methods for slowing down (or cooling) the atoms before deflecting them were necessary. The Yale group, working on an old idea enunciated by the Soviet physicist V V Vladimirskii in 196 1, created a magnetic mirror with an ordinary audio tape. They recorded a five kHz (kilohertz) audio tone on a cassette tape. The process of recording magnetises the tape, which is then cut into strips. The magnetisation oil the tape had a period of 9.5 micrometre and the strips were then glued to a flat glass plate to form a magnetic mirror.

The particular configuration of the magnetic field reflects the atoms when it interacts with their magnetic moments. In the actual experiment, rubidium atoms were trapped in a magneto-optic trap which had a non-uniform magnetic field and three pairs of mutually perpendicular laser beams. The atoms are cooled by the lasers to an extremely low temperature (20 microkelvins) and then allowed to drop from a height of about 80 cm onto the mirror created with the audio tape. The atoms are observed while they undergo multiple bounces for a duration of about 0.6 seconds.

In an improved version of the mirror with a floppy disk instead of audio tape, the researchers have managed to obtain more bounces for a longer time (around one second). Though the use of such magnetic storage devices for atoms is still a distant dream, scientists are excited about the possibilities Of using this simple and effective technique for making magnetic mirrors.