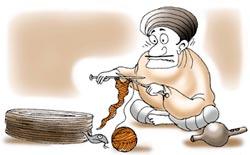 the severe cold wave in northern India this year has not hit just humans hard, but also snakes. Bihar witnessed 24 snake deaths in January. These were reported from the Bikram sub-division of Patna and from 26 villages of adjoining Vaishali district. Out of the 24 snake deaths reported, 10 were cobras.

At first the snake deaths alarmed the villagers, who took it as an ill omen. But experts allayed their fears by explaining that since snakes are cold-blooded animals, they are vulnerable to the cold. Akhileshwari Nath, head of the zoology department, Patna University, is reported to have said that the abnormal cold penetrated into the soil layers where snakes usually hibernate, forcing them to come out in the open.

Entire north India was under a severe cold spell. Night temperatures in Bihar plunged to as low as 1.9C, the coldest in a century. The disturbing thought that spawned the recent phenomenon was whether it would upset the ecological balance. Feeding mainly on rodents, snakes are part of nature's pest control mechanism.

Renowned herpetologist Romulus Whitaker, however, dispels such fears: "If the snake deaths were reported in thousands, or in hundreds, we might have something to worry about in terms of impact on ecology."