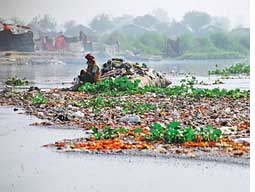 MAJOR rivers in India have high bacterial contamination, the Union Ministry of Environment and Forests (moef) said in a press release dated December 24, 2008. Yamuna and Ganga top the list of most polluted rivers (see graph below).

Bacterial contamination in water is indicated by the presence of coliform bacteria that find their way into rivers mostly through untreated sewage and cause waterborne diseases.

The moef admission on bacterial contamination in rivers seems to indicate a major shift in the way water quality is assessed.Its acceptance that coliform presence is an important parameter for determining water pollution levels is likely to change the pollution profiles of the 282 rivers monitored by the Central Pollution Control Board (cpcb).

Senior officials at the National River Conservation Directorate admitted that coliform is an important indicator of pollution. "It hasn't been projected yet because we realize that there is a gap between what our schemes envision and the real state of our rivers," said an official.

According to the ministry's norms, river water can be considered fit for bathing if the faecal coliform count is between the desirable limit of 500 and maximum permissible limit of 2,500 mpn (most probable number) per 100 ml. Going by these norms and based on the data published by the cpcb in July 2008, the ministry said water at 84 per cent of the board's river monitoring stations (numbering 1,245) is fit for human consum ption.

The cpcb statistics however do not tell the full story. According to cpcb's own water quality criteria (wqc), based on categorization of river stretches for various uses, 50 per cent of the monitored river stretches are unfit for bathing and another 17 per cent cannot be considered drinking water sources. The wqc is more stringent and mandates that total coliform (TC) including faecal coliform should not exceed 500 mpn. Until now Biological Oxygen Demand (bod), or the oxygen required for a river to support eco-systems, was the main yardstick for determining river pollution.

The cpcb publication Water Quality in India Status and Trends 1999-2001 said presence of coliforms of soil and litter origin had raised doubt on their reliability as an indicator of pathogen (disease causing germs). Also the method used for coliform estimation is not precise. Hence bod is the single most reliable parameter, cpcb said . Based on this approach the cpcb estimated that 67 per cent of river stretches in India are relatively clean with bod less than 3 mg per litre.

R C Trivedi, involved with cpcb's water quality monitoring, explained that bod is a more important indicator of pollution from the point of view of river ecology. "Coliform levels indicate presence of pathogens and are more important for assessing effect of human activity on the river," he said.


The cpcb data on which the ministry has based its press release also said rivers in India are getting cleaner. According to the data, 46 per cent of the sampling locations had water that conformed to total coliform standards in 1995. This figure went up to 50 per cent in 2007. "The water quality monitoring results with respect to indicator of pathogenic bacteria show there is gradual improvement in quality," the report observed.

These numbers too mask the reality. A close look at the data showed major rivers have recorded coliform levels many times higher than the permissible limit. The number of water monitoring stations that have recorded high coliform levels, have also gone up from 259 in 1995 to 623 in 2007.

It is also not known how much of India's river length is polluted if we consider both parameters-- bod and coliform. In such a situation it is critical to reassess the pollution profile of rivers. Deterioration of river water quality is a reality as cities let out untreated sewage into rivers. By cpcb's own estimate, only 6,000 million litres per day (mld) of the 33,000 mld sewage generated each day is treated. Here too most sewage treatment plants (stps) do not meet any standards. Even moef standard for treated effluent from stps (1,000 mpn-10,000 mpn) is lax.

The environment ministry has promised a rethink by initiating a fresh exercise for 'river conservation strategy' to promote a holistic and integrated approach.'

With inputs from Kshitij Gupta