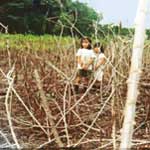 Breaking an 11-month-long impasse, Colombia has resumed spraying of the herbicide glyphosate along parts of its border with Ecuador. The move is aimed at destroying illegal coca crops. Coca is used to make cocaine. The aerial fumigation has, however, sparked tension between the two countries.

Ecuador says the fumigants are drifting across the border, damaging Ecuadorian environment and crops, and causing health problems. It has termed Colombia's move as a "hostile and unfriendly act" and has asked the un and the Organization of American States to intervene in the escalating dispute.

Colombia, the world's top cocaine producer and exporter, on the other hand, says the fumigation is important in its efforts to cut off drug-trafficking funds for leftist guerrillas fighting a four-decade insurgency. There are more than 10,000 hectares of land planted with coca leaves in the area, which can produce around 70 tonnes of cocaine a year with a street value of us $1.9 billion. Following similar complaints of environmental and health risks, Colombia had suspended the fumigation programme in December 2005, and reached an agreement with Ecuador to conduct joint scientific research on the fumigation process, before resuming the herbicide spraying. However, in the second week of December, it resumed fumigation saying that illegal coca crops were mushrooming in the area and the herbicide glyphosate is not toxic.

Colombian president Alvaro Uribe has agreed to let scientists study the effects of the herbicide.