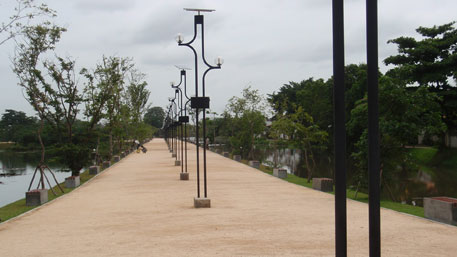 Last year five acres (2.02 hectares) of a natural wetland in the Sri Lankan city of Colombo, called Nawala Kotte, was turned into a park, locally known as Welli Park or Wetland Park. The initiative was welcomed by the city residents as the park gave them access to their natural heritage. But ecologists are not in favour of the wetland being turned into public space and constructing walking and jogging trails in it.

Such an intervention has resulted in the wetland losing its character and the place feels too artificial, says Jagath Gunawardane, an environmental lawyer in Colombo. Sunela Jayawardene, an environmental design architect, who designed an eco-resort by turning barren paddy fields into a wetland in Sigiriya in the Central Province of Sri Lanka using rainwater, also believes that the park should not be called Wetland Park. “It is a good public space but do not call it a wetland,” says Jayawardene. Making it less concrete and planting more wetland vegetation that includes a variety hydrophytes could have helped the wetland retain its character better, said Jayawardene. 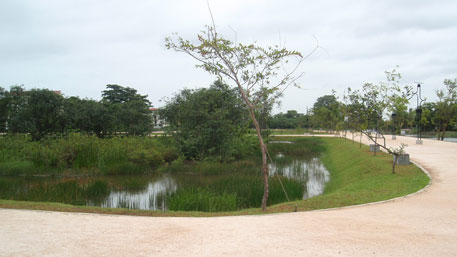 Colombo is surrounded by an inter-connected network of wetlands.  These help to recharge groundwater and control local floods. The Wetland Park has been built by the Ministry of Defence and Urban Development Department as a part of a project aimed at giving a facelift to the city and to bring in more tourists. In Sri Lanka, these two ministries work together as one department. The project that was started in June 2012 and opened to public in January 2013, cost approximately SLR 81.6 million.

The Wetland Park was envisioned as a beautiful environment for the citizens of Colombo without losing out on the ecological benefits of a wetland. One of the attractions of the park is a 1.45 km-long walkway that crisscrosses the wetland. To make the project environment-friendly, the lighting arrangements for the Wetland Park and walkways are powered by solar panels.

Conserving wetlands and maintaining access for the public is possible by integrated approaches (ecology and engineering); however, the path crisscrossing the wetland blocks the water inlet and outlet channels. This impairs the functional ability (recharge of ground water and flood control) of the wetlands, which means the food chain gets altered and also bioremediation ability (purification of water) gets reduced, says T V  Ramachandra, a senior scientist with expertise in wetland ecology at the Centre for Ecology and Sciences, a research institute in Bengaluru.