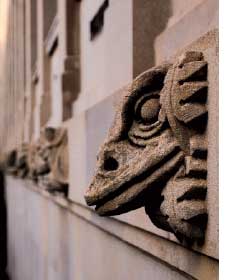 Two sculptures at the Australian War Memorial in Canberra have become the centre of a controversy about the depiction of aboriginal people. The sculptures depicting aboriginal faces are included in a series of 26 gargoyles depicting animals. They were installed in 1940, but debate about whether it is appropriate for them to stay has been renewed.

Aboriginal elder Matilda House said the memorial was a national body that should respect the rights of aboriginal people. "'We have some wonderful people who fought for this country. Don't belittle us by having these statues. When people still think we are part of the flora and fauna it's time for Australia to start thinking about the quality of the education system," she said. However War Memorial spokesperson Emma Campbell says the sculptures were part of the original design of the building and were not the only representations of aboriginal people in the gallery. "We encourage the public to have a look at them and then if they do have any concerns well then of course we're happy to take those on board," she said.