Molecules in the condom react with bacteria in the infection, triggering a change in colour on both sides of the condom 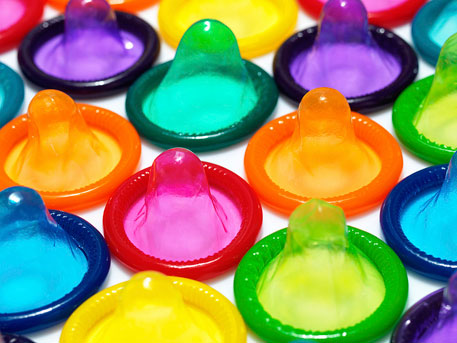 A group of students at the Isaac Newton Academy in Essex, England, have invented a “smart” condom to detect sexually transmitted infection (STI) in the wearer. Called S.T.Eye, the latex condom is covered with antibodies that would react with the bacteria found in STIs, triggering a change of colour. This would occur on both sides of the condom. In the presence of STI, the condom would turn green for chlamydia, purple for genital warts, blue for syphilis and yellow for herpes.

The idea, which is still at the concept stage, is the brainchild of Daanyaal Ali (14), Chirag Shah (14) and Muaz Nawaz (13), who won the TeenTech award this week for their proposal. The competition encourages 11-16-year-olds to create “technology to make life better, simpler or easier”, and includes prize money of £1,571 and a trip to Buckingham Palace.

The winners told BBC Newsbeat that they took inspiration from an HIV testing method called Elisa which utilises colour-changing technique. “Once the bodily fluids come into contact with the latex, if the person does have some sort of STI, it will cause a reaction through antibodies and antigens hanging on to each other, which triggers an antibody reaction causing a colour change,” Ali explained. They wanted to make detecting harmful STIs safer and easier, in the comfort of one’s home and without the embarrassment of going to a clinic. “We noticed how big the condom market was—there were over 4,50,000 STI cases in England in 2013 alone,” Ali said.

The young students have already been contacted by a condom company who is keen on developing the concept further. “The technology for colour change in the presence of an antigen is certainly something that does happen. It normally requires some additional chemicals in that process and with a condom you would obviously need to make sure that those chemicals are not going to be harmful or toxic or in any way cause irritation,” Mark Lawton, a consultant in sexual health and HIV at the Royal Liverpool Hospital, told BBC.