Use of organic colours can make the Holi revelry safer 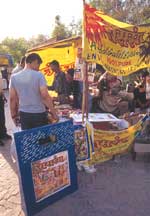 holi had a different tint to it this year. More than a handful of people across the country decided to enjoy the festival in its original yesteryear fashion -- using colours made from ingredients such as rose petals, sandalwood and turmeric. Leading the pack was Delhi, where organic colours were sold on a large-scale. This was part of the safe Holi awareness programme started by the Delhi government last year. "The programme was started considering the detrimental affects of the commonly available colours," says Anil Kumar, a senior scientific officer with the department of environment, Delhi government.

The commonly available colours that are made from synthetic dyes are very harmful for human health, as they contain toxins such as heavy metals, asbestos, silica and powdered glass. Recently conducted tests by Toxics Link, a New Delhi-based non-governmental organisation (ngo), in collaboration with the Indian Institute of Technology, Kanpur, revealed high levels of toxic mercury metal in the red colour. Due to such ingredients, these colours can result in a number of ailments ranging from cancer to loss of eyesight. For example, in Hyderabad over 50 people complained of burning sensation in the eyes this year after the revelry. Doctors apprehend that three of them may lose their eyesight.

"Use of chemical colours can result in skin allergies, the affects of which can persist for a long time. A lot of people suffer from these at the time of Holi. On the other hand, herbal colours have a soothing affect. They have been used since time immemorial," says S K Gupta, chief of national poisons information centre, department of pharmacology, All India Institute of Medical Sciences (aiims), New Delhi.

Chemical colours affect the eyes most adversely. "Use of these colours at times can result in cornea abrasion. In some cases, they can cause corneal ulcers which result in cornea opacity that leads to vision impairment," elaborates Nita Gurha, a consultant eye surgeon at the New Delhi-based Batra hospital and medical research centre.
Using organic colours can help avoid all such problems. In Delhi, the efforts to promote organic colours fortunately did not go down the drain. There was a slight decrease in the number of people affected by Holi colours this year, according to R K Joshi, senior dermatologist at the Indraprastha Apollo Hospital, New Delhi. "Use of organic colours was one of the reasons behind this decrease," he adds. However, he is not completely complacent about their benefits. "It is important that these colours are tested for allergy-causing ingredients, as the allergic reaction is due to the presence of paraphenyl diamine, a dye used in both chemical and organic colours," he asserts.

They are many other experts who opine the same. "Organic ingredients like arrowroot and talcum powders are innocuous, but can cause problems if they are not used in purified form," informs M Mohinder, consultant dermatologist at Batra. According to Gurha, even herbal colours can be harmful for eyes, though the seriousness of problem is less when compared to chemical colours. "The government should ensure that the ingredients are not harmful," says Suresh Gupta, a paediatrician at New Delhi-based Sir Ganga Ram Hospital. Anusuya Bose of New Delhi-based ngo Navdanya, feels that the government should strictly monitor the quality of these colours. "Delhi government is already exercising quality control by issuing certification to companies only after their products pass the requisite tests," says Kumar.

Certainly, organic colours hold the promise of a safer Holi. "Using herbal colours is a welcome step if these colours are not adulterated," says Ashok Gupta, a family physician from New Delhi. However, most people are unaware about their availability and benefits. Madhumita Dutta, central coordinator of Toxics Link, opines that manufacturers of these colours should be given incentives. This will help in decreasing the cost of these colours, which in turn would increase their demands.