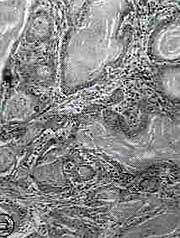 THE battle to conquer this killer disease is on. Scientists work relentlessly to devise better ways of diagnosing and eliminating deadly tumours. Recently, two groups of researchers, working separately, made yet another breakthrough in this direction, reports New Scientist, Vol 148, No 1998. Two techniques were developed - one for better detection and the other for painless elimination of turnours.

x-rays and other imaging techniques can falter in detecting cancerous tissues. A surgeon thus relies on his sense of touch while removing turnours to look for those additional tumours that these detecting techniques overlook. "A turnour may be 10 times as stiff as the surrounding tissue, but only 10 per cent darker in an x- ray or magnetic resonance image", says Richard Ehman at the Mayo Clinic in Minnesota, USA. The new technique developed by Ehinan promises better detection of lumps.

Using a loudspeaker, magnetic resonance imaging and some computer software, tissue stiffness can be detected without surgery now. A mechanical wave is generated through the tissue using an acoustic speaker. The principle used being that stiffer the material is, the longer the sound's wavelength 09 becomes as it passes through. The advancing compression waves can be visualised using magnetic resonance. The software used can turn this data into a 3D picture in 10 to 15 seconds. And stiffer the tissue, the darker it appears to be. "The potential sensitivity of the technique gives it a lot of power" that leaves no chance for the cancerous tissue to camouflage itself.

The treatment of cancer is agonising for patients. Surgery disfigures the patient and large doses of drugs cause nausea, hair loss and suppressed immune response. Comparatively, the other technique devised by the researchers can be regarded as a boon for cancer victims. Torturous side effects of cancer therapy can be circumvented now by literally shocking turnours to death.

Using electrical pulses to pump anticancer drugs into tumours is surely a novel method. Researchers at the California-based Genetronics company succeeded in developing such a system that proved its efficacy during recent tri- als. At the Florida-based Moffit Cancer Center in the USA, trials were conducted on 27 patients with aggressive skin can- cer. The treatment successfully and painlessly removed skin tumours that had failed to respond to conventional chemotherapy.

The procedure involves injecting an anticancer drug around the tumour aJ simultaneously subjecting it to a massive pulse of electrical energy. Nee electrodes strategically positionle around the tumour dispense both ele tricity and drugs into it. The anticancl, drugs slip inside through pores in t walls of the cells that are temporari$ opened by the electrical pul Subsequently, the tumour shril: forms a scab and falls off, leaving fre skin underneath that hea I completely. Besides being painless, A procedure can remo turnours "with doses of toXVO drugs 400 times smaller th would be needed if the dru were injected into the blood- stream".The treatment is A less harmful to normal ceIlL than conventional chemotheig apy. Moreover, it is less traumatic. Surgical treatmelc would involve removing the whole or a part of the org4 afflicted with cancer. "All you feel is a little tingle", says LOC Crandell, the president of Genetronics. With the elec trodes applying a potential of around 1.2 kilovolts per cele timetre of skin, care has to be taken that the electric pulse C carefully controlled to prevent damage to the normal cells.

Can this technology treat larger, internal turnout" Genetronics is hopeful that a- can, after some modificatio"O The aim is to provide surgeons a kchole technique where the electrodes 'walk around' the tumours. Hav, treated skin cancer successfuIr researchers at Genetronics are currt working to make it viable for treati@ larger, internal turnours. Hopefully, thW-- anticancer system shall be ready for to tine use in 1998 after further modifijp tions and clinical trials.