Or, why mohfw should be worried 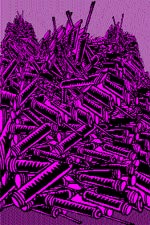 From 2005, mohfw (Union ministry of health and family welfare) plans to introduce auto-disable (ad) syringes under its Universal Immunisation Programme (uip). ad syringes are supposed to better reduce the risk of disease transmission than glass or disposable syringes (currently in use), because they lock up after the shot is given, and so must be destroyed. Thus the present move is right, but some issues need immediate attention.
There aren't any guidelines on handling and disposing ad syringes off. As Bharat Sharma, environmental engineer with the New Delhi-based Central Pollution Control Board (cpcb), puts it: "The Bio-Medical Waste (Management and Handling) Rules came into force in 1998, when ad syringes were not in use. Hence, the rules do not specify anything about them. Hence an urgent need for guidelines." Who will prepare these guidelines? cpcb claims mohfw should take a lead; the latter wants cpcb to do it.
As per official estimates, close to 210 million syringes are used annually to administer vaccines. So how will this vast number of ad syringes, which are going to be generated next year, be disposed? The general practice till now is that syringe waste is openly burnt, more commonly in rural areas where 80 per cent of immunisation injections are administered. In such a scenario, what is the feasibility of a centralised waste treatment facility? Should disposal of ad syringes be on-site or off-site? "We need some serious thought on these issues, but open burning should not be allowed. There are non-burn technologies, successfully used by other countries and also tested out in India," says Ratna Singh of New Delhi-based non-governmental organisation, Toxics Link. The national measles campaign of the Philippines is proof: "We collected 19.5 million syringes and did not burn even a single syringe. Everything was autoclaved and buried in deep pits," says Merci Ferrer, Asia coordinator, Health Care Without Harm, The Philippines.
mohfw believes ad syringes, meant for one-time use, needn't be disinfected. But, claim experts, this wouldn't rule out the risk of disease transmission.
According to P Haldar, assistant commissioner, uip, mohfw, it is still not clear where the ad syringe waste would fall -- category 4 (waste sharps) or category 7 (solid waste) of 1998 rules. There is also an urgent need to train nursing/hospital staff to administer ad injections and to properly use needle cutters for destruction of needles. At present there is no standardisation of needle cutters, which is why most hospitals use sub-standard products.
Last, but not the least, is the issue of supply of ad syringes. Will Indian manufacturers be able to meet the demand or will international tenders be floated?