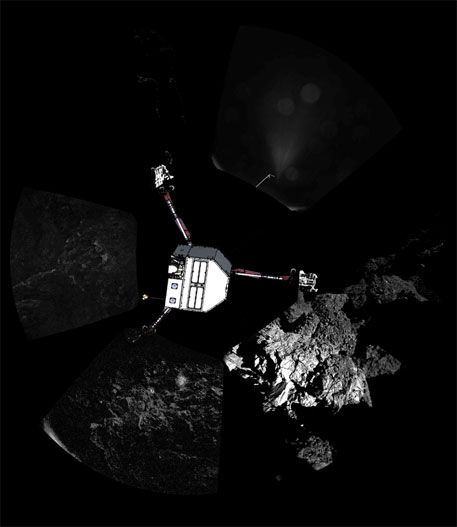 Philae lander’s mission ended early—within two weeks of landing on Comet 67P/Churymov–Gerasimenko—after its batteries ran out. But it has managed to deliver a “full set of results” about the comet before going into hibernation in the early hours of November 15.

Scientists from the European Space Agency (ESA), which is leading a consortium that includes NASA to find out more about the composition of comets and how they interact with the sun, are now analysing the data. According to their preliminary assessment, they have detected what might be complex carbon compounds on the surface of the comet. This supports a view that comets may have brought key chemicals to Earth to kick-start life, according to ESA.

The scientists have also released a handful of preliminary information about the comet, which suggests that the upper layers of the comet’s surface consist of dust of 10–20 cm thickness, overlaying mechanically strong ice or ice and dust mixtures.

The data sent out by Philae were gathered by the Ptolemy instrument, a miniaturised on-board laboratory. Among Ptolemy’s capabilities is the ability to analyse gases and particles around it. So Philae’s bouncy landing on the comet suited the experiment, Ian Wright, leader of Ptolemy, told BBC. As the first landing created a dust cloud, it provided Ptolemy with a feast of data.

According to ESA, Philae’s problems started when a thruster and harpoons designed to anchor the probe to the comet failed. The small probe bounced away from the original target touchdown area and appears to have settled under the face of a cliff. Even though the lander performed its experiments and sent back data, scientists are not sure about its exact resting place.

But Philae's eventual resting place in the shade meant that it would not be able to recharge its solar powered batteries. With its batteries depleted, Philae has fallen into “idle mode” for a potentially long silence. In this mode, all instruments and most systems on board are shut down.

The scientists say there is still a good chance that Philae will revive. As the comet nears the Sun, illumination on its surface is expected to increase. This may provide sufficient sunlight for the Philae lander, now in hibernation, to reactivate, although this is far from certain.

The mission of Philae lander’s mother ship, Rosetta spacecraft, is, however, far from over. Rosetta will now continue its own extraordinary exploration, orbiting the comet during the coming year as the enigmatic body arcs ever closer to the Sun.