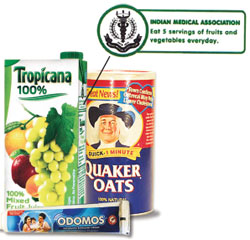 the association of physicians in India has decided to raise Rs 1 crore through endorsements this financial year. The decision comes a year after the Indian Medical Association, or ima, faced flak for endorsing food products.

When ima had endorsed PepsiCo's Tropicana (100 per cent) fruit juices, consumer groups, the media and a section of the medical community had accused it of crossing the ethical and the legal line. Drinking canned juice is not the same as eating fruits, they said, and accused the association of selling the image of doctors.

But they failed to force ima to re-examine its policy. The association aims to get more than half its proposed Rs 1.94 crore budget for 2009-10 by endorsing commercial products. In 2007-08 it received Rs 73.5 lakh through endorsements. ima calls itself a non-profit and maintains the endorsements are non-commercial. Its money will go in health awareness programmes, said S N Misra, who was the secretary general of ima at the time of the Pepsi deal. But minutes of the October 2007 meeting of its Endorsement Committee recorded it okayed receiving Rs 52 lakh a year from Pepsi and Rs 23 lakh a year from Dabur (for Odomos) for three years. Of the Rs 52 lakh from Pepsi, Rs 46 lakh was for endorsement and Rs 6 lakh for medical education programmes. ima officials refused to comment on the matter.

The Medical Council of India (mci), a regulatory body that controls the practice of medicine in the country, has not taken any action against the association despite complaints. The Indian Medical Council (Professional conduct, Etiquette and Ethics) Regulations state that a physician should affiliate with associations and that a physician should not endorse any commercial product.

In July this year physician K V Babu, who is member of ima from Payannur in Kerala, filed a Right To

Information (rti) application with mci asking what action it has taken against ima . In its reply mci claimed the association is not under its jurisdiction.

The imc Act enables the council to take disciplinary action against a physician for violating the ethics code; it can debar the physician from practising.

Babu's wife Bindu M V also complained to mci in June and August that the association has entered into an illegal contract with Pepsi and Dabur. mci's Ethics Committee replied it was not getting any response from ima on the charges. mci is a regulatory body and not a law enforcing body, it said.

"mci hardly takes action against ima because most doctors working with it are also members of ima," alleged lawyer-activist Prashant Bhushan.

While going ahead with endorsements, ima has devised a new way of dealing with criticism. It has proposed changing the term 'endorsement' to 'Public Private Health Initiative Programme'. ima's Standing Committee on Endorsements will be referred to as the Public Private Partners Initiative.

Misra claimed endorsements are in public interest since the association promotes generic health messages. "We don't promote the product but the content of the product. Fruit juice is good for health," he said. ima 's label on Tropicana 100 per cent juice says it recommends five servings of fruits and vegetables every day and not the brand, said Mallika Jankiraman, vice-president (health and wellness) of PepsiCo. Critics dismiss the deal between Pepsi and ima as a gimmick to tap the growing health market. The fine print on the ima label does not make the endorsement ethical; it will mislead consumers, said Bejon Misra, managing director of Consumer Online, a research, advocacy and litigation support organization.