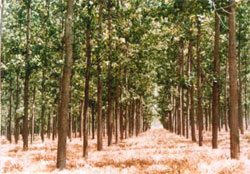 The Union government may soon come up with a scheme to commercially exploit degraded forests in the country. Environment minister Prakash Javadekar said on July 8 that the government is considering a plan to harvest open forests (canopy cover less 40 per cent) in the country in order to create jobs and reduce the import of wood.

The announcement came while he released the India State of Forest Report 2013. As per the report, India has a forest cover of 697,898 square kilometres (sq km). Out of this, 295,651 sq km are open forests, classified as patches of green cover having canopy density between 10 per cent and 40 per cent. This constitutes about nine per cent of the country’s geographical area. In the past two years, there has been an increase of more than 7,800 sq km of open forests. Simultaneously, there is a decrease of about 2,000 sq km of moderately dense forests (canopy density between 40 per cent and 70 per cent), indicating that either it has been deforested or has degraded into open forests.

So far, the national forest policy and the forest laws have discouraged commercial harvest of all the government forests irrespective of their canopy densities. However, the Centre has been mulling changes in the National Forest Policy for last more than a year. Javadekar’s comments give a hint that changes in the policy are on the cards. “On face value, the import of wood sounds good because we are protecting our forests and exploiting the forests in other countries. But by doing so, we are also exporting our jobs to other countries,” said Javadekar. “We have around eight per cent of the country's area as open forests. A portion of this, say 20 per cent, can be allocated for the livelihood needs of the local communities while the rest can be harvested for creating jobs,” he added.

This, perhaps, also falls in line with the long-pending demand of the paper industry, which has been persistently demanding leasing out of open/degraded forestland to it for commercial plantation and harvesting. The ministry of environment and forests, till the tenure of the last government, was opposed to this demand saying the primary function of the forests, as per the national forest policy, was to protect biodiversity value and to provide livelihood security to the local communities and not commercial gains. Environment activists have also been against leasing out forests to industries, arguing that it would compromise with the environment and rights of the local communities. Officials in the environment ministry also said that such a move would not only require change in the national forest policy but also in the national forest laws which has to be done by Parliament.

While Javadekar refused to divulge more information on the “scheme”, citing ongoing Parliament session as the reason, it is to be seen to what extent the government will bend to change its policy for forests.