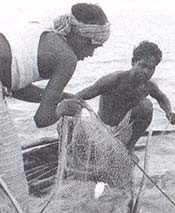 The poor man's access to common property resources which is declining due to rapid commercialization, needs to be protected, says a United Nations Development Programme report on Human Development in Bangladesh, focussed on the environment. The report was released on the eve of the World Environment Day on June 4. The 70-page report which enlists services of some ngo activists and scientists on the basis of secondary data says environmental degradation 'goes beyond academic worries about biodiversity and forest cover' because nearly 7 out of every 10 people make a direct living from land and water resources.

The report notes that Bangladesh has possibly the world's richest fisheries with more fish species than all of Europe combined, up to 500 including the close off-shore river-dependent species.

But farmers' access to land and fishermen's access to water is rapidly dwindling as new input requirements are being introduced beyond the poor man's capacity. Frequently, development projects have an adverse impact on the environment and the poor. The requirements of exotic high yield seed and an extra season of paddy cultivation make expensive inputs necessary increasing the cost of cultivation, constraining marginal and landless farmers.

The report recommends regional initiatives to interrelate the phenomena of biodiversity reduction and desertification to water sharing.