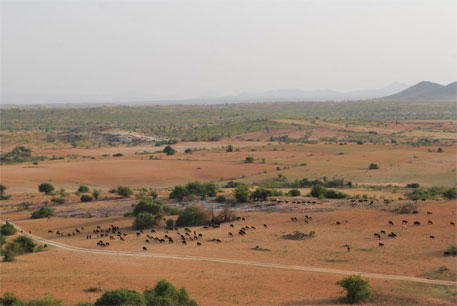 A report by Bengaluru-based public charitable trust Environment Support Group (ESG) highlights alleged irregularities in the diversion of common land in Karnataka. The report ‘Forfeiting our commons’ states that 4,047 hectare of biodiversity-rich pastureland in the Challakere taluk of Chitradurga district has been diverted for defence, industrial, infrastructural and commercial purposes.

The report was submitted last week to a two-member expert committee appointed by the Chennai Bench of National Green Tribunal (NGT). The committee comprises ecologist S Ravichandra Reddy and K V Anantharaman, retired scientist from the Central Silk Board.

Precious habitat
Chitradurga district has a precious biodiversity-rich grassland ecosystem that has been protected for centuries as Amrit Mahal Kavals or grazing pastures. This pastureland is a habitat that supports various rare species–the critically endangered Great Indian bustard, Lesser Florican, the highly threatened Blackbuck, Deccan Wolf and a variety of endemic flora. The district also falls under the agro-ecological sub region of the Eastern Ghats as per the Indian Council for Agricultural Research (ICAR).

Diversion for development
The local pastoral community of Challakere realised that their common land was being diverted in December last year when construction started on the site.

According to ESG’s report, the land has been diverted to allow Bhabha Atomic Research Centre (BARC) to establish a nuclear enrichment centre, Defence Research Development Organisation (DRDO) to test its drones for civilian and military surveillance, Indian Space Research Organisation (ISRO) for a satellite application centre, and Indian Institute of Science (IISc) to establish a synchrotron. The land has been sold at Rs 30,000 to 35,000 per acre (one ace equals 0.4 hectare). A real estate developer, Sagitaur Ventures Private Limited, has also been given 404 hectare of grassland to establish a solar pond on a lease rent of Rs 45 lakh.

Court directions flouted
Leo F Saldanha of ESG said that none of these developments have complied with any of the statutory clearances required under laws protecting grazing pastures, forests, environment, biodiversity and forest rights. Land for the projects has been promoted in patent disregard of specific directions of the High Court of Karnataka and Supreme Court of India that such ecologically sensitive grassland ecosystems should not be diverted for any purpose without judicial approval.

Meanwhile, ESG has also alleged that the decision for diversion came following the approval of the Karnataka Cabinet and the entire exercise was undertaken in comprehensive violation of various laws. The group said that the Karnataka Housing Board has also started constructing villas illegally in the grasslands because of the projects of BARC, DRDO and others. They speculated that the Indian Army may also demand 4,047 hectares to establish its camp.

ESG had, in February, challenged these decisions before the NGT, Southern Zone, Chennai. In response to the application, the tribunal had directed the constitution of an expert committee and had directed it to visit the impacted areas and provide a report on the scales of the projects and their impacts on communities and sensitive ecosystems. The committee had visited Challakere on May 23 to study the impacts and to speak to villagers.


Draft policy on inspection, verification, monitoring and the overall procedure relating to the grant of forest clearances and identification of forests