Commotion over a ban

The government bans the use of BHC. The industry files a petition and the issue hangs fire 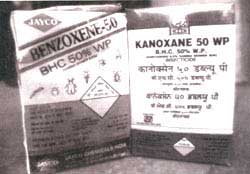 WITH the government ban on the manufacture and use of benzene hexachloride (BHC) coming into effect in India from April 1, vector control and pest control operations in agriculture have been forced to look for safer alternatives.

BHC is a highly toxic, non-specific organochlorine insecticide used mostly for a wide variety of agricultural applications. It was introduced into the national malaria eradication programme (NMFP) in 1959. One of the alternatives to BHC, synthetic pyrethroids, are being used in limited quantities since 1995-96. NMEP officials say that the ban is prompting them to test newer pesticides like synthetic pyrethroids and tryout alternative combinations of existing pesticides on field. Much now rests on a case scheduled to come up in the Supreme Court (SC) in the last week of April (at the time of going to press), to decide whether the ban is to be upheld or not.

According to Pesticides Association of India (PAI) estimates, BHC accounts for about 40 per cent of the total pesticide used in the country. PAI officials add that a complete ban on the manufacture and use of BHC, could lead to a substantial increase in costs, as its alternatives are more expensive than BHC. Environmentalists and health activists have welcomed the government ban. According to Sanjay Sengupta of Voluntary Health Association of India, "Though the decision of banning BHC's manufacture and use may not make much economic sense, but it is an environmentally sound decision." BHC is an organochlorine which can remain in water or soil for years and get into the ecosystem (Down To Earth, Vol 5, No 13).

However, PAI still hopes to continue with BHC in some parts of India. "Its use in vector control will, however, be permitted in the north-eastern states and in those pockets of the country where 'kala-azar' (leishmaniasis) is prevalent" says S C Mathur, executive director of the PAI. It is still not clear whether the BHC used in these pockets is to be imported or manufactured by any specific Indian pesticide manufacturer. The ministry of agriculture had issued a notification in the 'Gazette of India: Extraordinary', on January 1, 1996, declaring the intended ban on BHC. They had taken this decision exercising powers under the relevant section of the Insecticides Act, 1968. They had invited objections or suggestions therein. In the ensuing period, Kanoria Chemicals Ltd, New Delhi, had filed a case in the SC, seeking review of the notification.

"This is an arbitrary decision, taken without following set procedures. A registration committee, comprising of experts from the health ministry, agriculture ministry and the environment ministry reviews such plans. In this decision, the committee was by-passed in violation of the Insecticides Act," says C S Moondra of Kanoria Chemicals.

While malaria control experts state that the ban over BHC may riot have a large impact on mosquito eradication programmes, they fail to explain how, as they do not have readily or cheaply available alternatives. BHC has been the second-most important ingredient in the NMEP over the past decade.

Says V P Sharma, director of the Malaria Research Centre, Delhi: "BHC, a residual pesticide, is not very safe. Its termination should not pose a problem if there is enough money for alternatives-" NMEP Officials say that states had already been informed about the ban that was to come. As for an alternative, "it is not a simple matter," says NMEP deputy director R L Yadav. "Technical, financial and departmental matters are involved" he says. However, he is optimistic that there are enough alternatives in the anvil for NMEP, referring to synthetic pyrethorids and biopesticides.