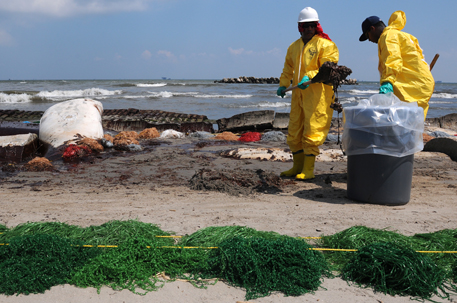 For long, energy giants have managed to get away with oil spills that lead to irreparable environmental damages and health hazards. It seems they will now have to get their act together as affected communities are demanding immediate action against them.

In the past one month, communities of Nigeria and Peru have demanded punitive action against oil giants ExxonMobil and Pluspetrol for polluting their regions. In the US, BP has begun settling medical claims of those who suffered health hazards in the 2010 Gulf Coast oil spill.

After dragging energy giant Shell to court in its own country, communities in the oil-rich Niger Delta have taken on another oil company, Mobil Producing Nigeria (MPN) that caused massive oil spill in Ibeno Local Government Area of Akwa Ibom state on June 29. Three communities in the state have called on MPN to clean up the oil spill or risk hostility. MPN, a subsidiary of ExxonMobil, is the second largest producer of crude oil in Nigeria after Shell.

According to environmental group, Peace Point Action, the oil spill occurred after a storage facility of MPN got damaged in thunderstorms. It spewed more than 15,000 barrels of crude oil, contaminating the Atlantic coastline and the fragile ecology of villages of the three communities—Nkpana, Inua eyet ikot and Esuk ikim ekeme.

Okon Akpanubong, head of an affected village Iwuo Okpom, told Nigerian newspaper Leadership that there had been a series of oil spills in the area but the company never carried out prompt clean-up operations. The lives of Ibeno people, who depend on fishing for sustenance, are deteriorating because of recurrent spillage in the area. On June 30, thousands of people took to the streets demanding immediate clean-up and compensation.

A similar uprising was witnessed in Peru in the last week of June when hundreds of indigenous people from the Amazon rainforest threatened to go on hunger strike. They were protesting against the government’s inaction to protect them from the toxic effects of almost half-a-century of contamination caused by oil mining. For two weeks, around 500 Kukama indigenous people, with health problems such as bronchitis, camped in a square in Iquitos—the biggest city in Peru’s Amazon—after travelling more than 100 kilometres from their settlements along the Maranon river.

Oil production has been going on in the region since the 1970s. Today operations are run by Pluspetrol, partnered by Petrochina, which is controlled by China’s state-owned firm CNPC. In January, the Peruvian authorities had found alarming levels of heavy metals and hydrocarbons in the wetlands of Kukama territory. In some areas, the levels of contaminants exceeded up to 95 times the permitted environmental standards. The authorities also found that the oil companies operating in the region did not always report oil spills. In May, the government declared that the environment and health of the communities in Kukama territory are at significant risk, but did not take any action to alleviate their condition.

“The lives of our children are at stake following oil contamination,” the Kukamas announced in a statement circulated by Puinamudt, a collective of indigenous organisations. “We urgently request water, food and healthcare. We want the government to take concrete actions.”

According to the Kukama federation Acodecospat, the hunger strike was postponed after Peruvian officials met the indigenous people and promised to install portable water purifiers in the settlements of affected communities.

The US has, however, managed to settle the medical claims filed by Gulf Coast residents and cleanup workers who were affected by the 2010 oil spill of BP. As the damaged oil well of BP spewed oil into the Gulf for nearly three months, people complained of a host of health problems, including skin and respiratory ailments. After more than a year of delays, BP has paid the first 100 of about 10,000 medical claims filed by the affected Gulf Coast residents and cleanup workers. "There's about 800 cases already ready for payment and of those, approximately 100 have cleared and we're working every day to clear the balance," said Matt Garretson, the administrator appointed by U.S. District Judge Carl Barbier to process and pay those claims, head of Cincinnati-based Garretson Resolution Group.

The payments range from about US $900 for those who worked or lived on oiled coastline to more than $60,000 for those who suffered chronic injuries and required hospitalisation.