Complan, Saffola and Kellogg’s under scanner for misleading public

Whether it’s Complan or Horlicks, they claim to make a child taller and smarter. But their promises are not based on any scientific data. 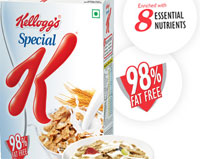 Now such food products in the Indian market have come under the scanner of Food Safety and Standards Authority of India (FSSAI) for making false health claims on the labels of their products.

Abu Hasem Khan Choudhury, minister of state for health and family welfare informed Lok Sabha in a written reply on November 30 that the food regulator has begun prosecution proceedings against manufacturers of 19 leading brands and has issued show cause notices to 19 others for making false claims regarding the nutritional value of the product in advertising and on the label.

These food products violate Section 24 of the Food Safety and Standards Act (FSSA). According to Section 24, no person can make false claims in oral, writing or even by visual representations regarding the nutritional value of the product or efficacy of the product without providing any scientific justification.

“The FSSAI monitors labels on various food items and claims advertised for food items by different companies in print and electronic media. Such findings and complaints received from stakeholders are analysed in FSSAI and show cause notices are issued to the manufacturers. Their replies are examined at FSSAI by a three-member committee constituted for this purpose. As per recommendations of this committee, actions including prosecution are initiated by designated officers at the regional level,” the minister informed.

According to him, companies were found to be making false claims about issues like children’s health and memory, cardiac health and obesity. For instance, Complan, a leading drink brand, claims that it makes children grow twice faster. Horlicks promises to make children  “taller, stronger and sharper”. Kellogg's Special K claims that people, who eat low fat food in their breakfast, tend to be thinner than those who do not, without providing any scientific study to back up this claim. Products like Saffola Oil, Rajdhani Besan and Britannia Vita Marie have been booked for making false claims of being “heart-friendly” and “reducing cholesterol”.

Many of these brands also show double standards. Complan and Horlicks, which claim to make kids taller in India, do not make any such claims in the UK. They also use kids on their labels as well as in advertisements in India but not in the UK. FSSAI has also booked Complan Memory for showing on its label students with books which can mislead people that after consuming the drink, one will be good in studies or pass exams.

The regulations in India allow companies to get away with whatever they want to advertise to people. Companies can be a fined a maximum of Rs 10 lakh for false and misleading claims under Section 24. This is negligible amount for the companies which make crores by selling their products.