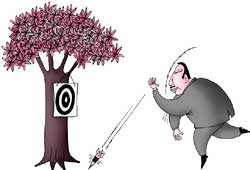 The moef (Union ministry of environment and forests) is a gross under-performer, and way off its targets for the tenth Five Year Plan. This is what the Planning Commission has concluded, in its mid-term appraisal of the ministry's work "Disappointing" and "inadequate" are the themes that run through the commission's report, finally endorsed by the National Development Council on June 28, 2005, after a year of controversy over the report's conclusions. moef steadily refuses to accept them. "Sustainability is not an option, but an imperative" is the philosophy that propelled the tenth Plan's emphasis on maintaining environmental quality to achieve quality of life. But this imperative is entirely absent from moef's existing programmes, as well as new strategies.

The tenth Plan stipulated that moef was to increase "forest and tree cover to 25 per cent by 2007 (end of the tenth Plan period) and 33 per cent by 2012 (end of the eleventh Plan period) as against the baseline cover of 23 per cent in 2001". In this respect moef 's progress, says the report, is "disappointing". Total forest cover does not appear to have increased despite 1.1 million hectares covered under annual afforestation programmes. Afforestation has occurred only in harvested and degraded forests. "It is not about increase in forest cover; even if we are able to maintain the forest cover, it is commendable," argues Karan Deo Singh, honorary senior fellow at the Ashoka Trust for Research and Ecology and the Environment. No comment was forthcoming from the ministry.

The commission's appraisal goes beyond rapping moef on its knuckles. It emphasises the need for the judicious use of forest resources and -- crucially -- community participation in afforestation to achieve the tenth Plan target.

Efficiently managing forests, the appraisal avers, can contribute to creating large-scale employment opportunities in rural areas. Community management can support the livelihood of tribal populations inhabiting forest fringe areas in a sustainable manner. The commission emphasises the need for an appropriate policy to increase "people's involvement in afforestation and promoting afforestation outside forests". To facilitate this, panchayati raj institutions should be associated in developing social forestry. "Community participation can be increased by providing legal framework, forest ownership, market guarantee and investment in soil and water conservation," said Singh.

As against the target of "cleaning major polluted rivers by 2007 and other notified stretches by 2012", the progress has been grossly "inadequate"; the National River Conservation Programme will achieve only 30 per cent of sewage treatment capacity by the end of the tenth Plan. The water quality in most rivers has not improved. The river Yamuna continues to be "a matter of grave concern": the river along its 22 km stretch in Delhi "is reaching septic conditions".

Despite various measures, air quality in metros and some Class- i cities poses a grim picture. The appraisal points out that air and water quality monitoring programmes are confined to a limited number of towns and cities. The commission has asked moef to expand its programmes: emphasises R Mandal, adviser, Environment and Forests, Planning Commission, "Only monitoring and evaluation is not enough, the emphasis should be laid on to improve the quality."


Out of 590 protected areas (pas) only 204 have reportedly approved management plans. Relocation of villages from pas has "not met with success". The appraisal suggests issues such as religious events, traditional rights and practices or human-animal conflicts should be included in the management plans. Pointing to the non-sighting of animals in sanctuaries such as Sariska and Ranthambore, it raises questions about the "system of monitoring wildlife" [See 'Maneaten', Down To Earth, March 15, 2005], also emphasising the need for appropriate legislation on "trade in endangered species" and extending it to medicinal plants and essential and aromatic oils. In the appraisal, the deputy chairperson of the p lanning c ommission efforts must concentrate on biodiversity conservation and development of lakes and wetlands.


As per the appraisal, there exists a wide gap between "what has been done and what is to be done" under various international treaties and conventions. Though moef has implemented the Charter on Corporate Responsibility for Environment Protection for industries, "government efforts need to be complimented by the cooperation of industries and user's sectors". The appraisal emphasises taking up new initiatives related to obligations under the Kyoto Protocol and adopting cleaner technologies to increase resource efficiency and reduce pollution control cost. In addition, "the process of environmental clearance needs to be revised to avoid the delays in completion of development projects". The Tenth Plan provides for Rs 5,945 crore (revised to Rs 6,983 crore) under the broad programme on environmental concerns, forestry development, wildlife protection, river and lake conservation and animal welfare. Only 49 per cent of this outlay seems to be utilised during the first three years (if outlay for 2004-2005 is fully used); 51 per cent is left for the next two years, much below expectation. The animal welfare scheme was transferred to the ministry in the tenth Plan with an outlay of Rs 175 crore: the appraisal has criticised moef for failing to implement schemes under this head.

The appraisal emphasises "resource generation" to reduce dependency on government grants by research and educational institutes in the environment and forests sector: Institutes "must take pro-active initiatives for transferring technology from laboratory to commercial level and assist the industry in popularising the products using new technologies".


To promote efficient use of financial outlays for various schemes, the planning commission emphasises Public Private Partnerships (ppps). This would supplement government's efforts by civil society groups. Says Mandal, "There is a need to explore the possibility of entrusting the responsibility for operation and maintenance (especially treatment facilities) with private agencies". The appraisal thus suggests a system of revenue sharing generated on account of "appropriate user charges to the household" or "leasing out any vacant land for converting into public park". Mandal feels ppps can be very effective in forest management. "The pulp and paper industry is starving for raw material. They can be encouraged to invest in the forest sector and we can facilitate," he says. "Even non-timber forest products (ntfps) provide a huge possibility of partnerships," argues Singh. In 2000-2001, 40 per cent of total forest revenue came from such products, a whopping Rs 3,000 crore. " ntfp contributes towards subsistence and cultural needs, and provides employment, to tribal people and the rural poor," Singh adds.


The appraisal also emphasises the role of state governments in achieving goals in the environment and forest sector. "To encourage forest protection and conservation, due recognition to on-going efforts should be accorded to states; simultaneously, states have to provide enough importance to conservation programs," says Mandal. The state government can ensure efficient operation and maintenance of waste treatment facilities. However, the appraisal criticises states for their slow response to both river and lake conservation programmes, and lack coordination with moef. "In most cases the maintenance of treatment facilities is not supported by state governments; ultimately, despite huge sums poured in, nothing happens," he adds.


The commission praises the role of environment education. "Environmental Awareness through Eco-clubs has been playing a key role in spreading the message for Clean Environment". Slogans like 'Say no to Plastics', 'Light Lamps-not Crackers', 'Save Trees-Save Life' are useful in this respect. Such programmes, however, need to be expanded to include schools in rural areas. "Of all programs, at least 50 per cent should be for the rural areas, so that they also know about environmental issues and management practices," says Mandal.

The principal areas, sums up the Planning Commission's appraisal, that need to be addressed are "increasing the forest and tree cover, cleaning of polluted rivers and lakes and reduction of effluents and their treatment to control water and air pollution." To achieve the goal, moef has to involve communities in its conservation programmes and expand these to rural India. As Singh says, "Ultimately it is a question of a race between human survival and the environment.