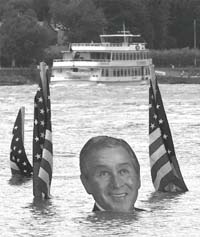 history was created on July 23, 2001 at Bonn, Germany, when 180 countries finally reached an agreement on rules to implement the Kyoto Protocol, an international treaty to combat global warming, after almost six months of political uncertainty on the issue. "We felt that we needed that the result (the Bonn agreement) not only for climate reasons, but also in order to show that multilateral negotiations within the framework of United Nations do make sense. It is possible to reach a result," remarked Jan Pronk, president of the climate change talks held in Bonn, in a befitting reply to the us ' unilateral decision to withdraw from the protocol in March 2001.

The agreement, reached after more than 48-hours of non-stop negotiations, paves the way for the ratification of the protocol, binding industrialised countries to reduce emissions of heat-trapping gases by a specified percentage.However, the agreement left much to be desired. Two days into the high-level ministerial discussions, Pronk presented a proposal for an overall compromise. "We have a legally binding international agreement that leads to real reductions. This is our argument for supporting this proposal, besides all the hard-swallowed compromises," said Jurgen Trittin, German environment minister, while accepting the proposal in the larger interest of making the protocol work.

All countries, except Japan, Canada, Australia and Russia, agreed on the proposal after Pronk adopted a tough line for not accepting any changes to his proposal. He only offered countries and groups a choice of accepting or rejecting the proposal. These four countries agreed on all but one issue -- compliance with the protocol commitments. This was in contrast to the situation at The Hague, the Netherlands, in November 2000, where the previous round of discussions failed as countries failed to reach a consensus on the use of sinks-forests that absorb carbon dioxide from the atmosphere.

Japan, Canada, Australia and Russia asserted that they did not want punitive consequences or financial penalties in case an industrialised country was not able to meet its commitments under the protocol. The European Union ( eu) and developing countries, instead, wanted a stronger framework to ensure proper implementation of the protocol. The final agreement contains a system of issuing early warning to a country about its potential non-compliance, and stresses non-punitive consequences. In addition, there are no financial penalties if a country failed to reduce its emissions.

Details agreed under other issues witnessed similar dilution in environment-sound policies of the eu and developing countries. The agreement does not impose any quantitative limit on the use of flexibility mechanisms involving trading of emissions and project-based investments in clean energy projects in return for reduction credits. It merely says that domestic efforts should constitute a "significant element" of their efforts to meet reduction commitments.

Afforestation and reforestation projects have been permitted under the clean development mechanism ( cdm ), under which industrialised countries can invest in projects to reduce greenhouse gas concentrations in developing countries in return for emission reduction credits. However, they have been asked to refrain from undertaking credits for nuclear projects under cdm .

Apart from a special climate change fund and a fund for least developed countries established under the un Framework Convention on Climate Change ( unfccc ), an adaptation fund has been set up under the Kyoto Protocol. This division between financial commitments of industrialised countries under unfccc and the protocol was important as the us recognises only the former and was not willing to make any contribution towards developing countries' adaptation as required under the protocol. The eu felt this placed a greater demand on them when the us , one of the biggest emitters, was not required to pay anything towards the adaptation fund.

The proposal does not set aside a target for the three funds; instead countries would allocate an amount through a political declaration. The eu announced an annual sum of us $410 million, to be contributed towards the adaptation fund by 2005. This figure could be revised in 2008. Japan would annually provide about us $2.4 billion as entirely concessional loans for projects related to climate change in developing countries.

The issue of sinks also saw huge concessions being made to Japan to ensure its approval. In accordance with a proposal submitted by Japan, Canada, Australia and Russia in the early days of negotiations, the agreement sets country by country limits for the amount of credits that can be taken by managing forests.

It was in all ways a compromise proposal, but one that may perhaps lead the world towards greater and meaningful reductions in greenhouse gases.