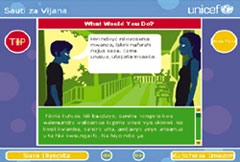 Unicef has launched the first computer game in Kiswahili, aimed at halting the spread of hiv and aids. The game called, Ungefanyaje? (What Would You Do?) takes players through various scenarios to explain the importance of prevention and testing.

Players choose from different options as two male and two female characters embark on relationships. More than 100 million people speak Kiswahili across east African countries such as Kenya, Tanzania, Uganda and the Democratic Republic of Congo. The un estimates that more than 80 per cent of them know very little about the problem of aids.