More and more libraries are incorporating computer networks in their effort to reach the entire world. 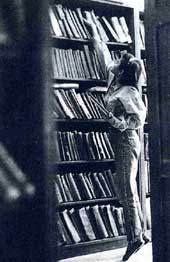 CAN ONE consult a book from a library in Paris while sitting in Delhi? The obvious answer would be no, but given the pace at which modern communication technology and computers are being developed and adopted by libraries, it may well be possible in the next few years. Readers will be able to consult any literature in any library to which their personal computers are linked, unfettered by national or geographic boundaries (New Scientist, Vol 136, No 1850).

Computer networks will reduce drastically the time it now takes to find desired information. Lynne Brindley, head of the British Library of Political and Economic Science in London, says looking for an obscure title at present may involve a time-consuming search through dozens of individual library catalogues. Using a computer network, the seeker will merely have to press a few keys to call up the information on his computer screen.

Though the process of computer networking libraries is at an incipient stage in most places, the catalogues of 75 British university libraries and many American and European institutions are already available to anyone with a personal computer. Most university libraries in the UK accept orders for books placed through computers. The Bibliotheque Nationale in Paris accepts book reservations entered through any of the 6 million Minitel telephone communication terminals in France. A new library in Paris, which will open in 1995, will make 3,00,000 documents available in electronic form to researchers. Initially, these will not be available outside the library because of publishers' concern about copyrights.

The greater use of computers will also speed up transmission of newly acquired information. Current Clinical Trials, a scientific journal published by the American Association for the Advancement of Science, exists only in the electronic form and it can publish a paper in as little as 48 hours.

The new British Library in London, which will be ready by 1994, plans to introduce a new electronic catalogue called OPAC (On-line Public Access Catalogue). OPAC will be accessible to academics through an inter-university computer network. Though the British Library intends to place great emphasis on electronic documents, director of research Brian Perry says experiments to convert documents into an electronic form are as yet at an early stage.

However, before computer technology finds acceptance on a large scale, there are several drawbacks that have to be overcome. The quality of graphic images displayed by the current computer technology is not comparable to that of images printed in books. Only high speed communication networks, which are not developed as yet, can produce high quality graphics. Moreover, no uniform standard has yet emerged for storing and recalling images.

Perry says developing countries will benefit the most from the technology because they will receive information faster -- a scientific journal may take as long as three months to reach Thailand by post. Brindley, however, does not agree with Perry. She contends the new technology will not benefit Third World countries, many of which do not even have an efficient telephone system.

Though the trend for computerisation of library documents is gaining popularity, for people such as Stonier, "The feel and smell of a book are very important -- to our generation, they give a kind of companionship."