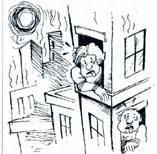 Residents of Bhubaneswar were in for a hot shock when the temperature soared to 46.3 degrees Celsius on May 7. According to environmental scientists, the climatic disorder was caused by the large-scale construction of concrete houses and falling of the groundwater levels. Bhubaneswar has now earned the dubious distinction as the country's hottest state capital this summer, leaving well known hot spots like Lucknow and Patna behind. Meteorologists described the May 7 experience as a "stray and sporadic" phenomenon caused by the strong westerly wind blowing across central India.

The longtime residents of Bhubaneswar, however, complain that summer temperatures have been scorching for the past few years. This is due to the widespread use of concrete for city buildings, feels C R Das, solar energy expert and environmental scientist. Ecologist K L Pujari points out that with Bhubaneshwar's laterite soil, concrete structures should be severely restricted to maintain the environmental balance. The indiscriminate use of groundwater by residents has also caused a drop in the groundwater table and drying up of the top soil in many areas, contributing to make the city a heat chamber.