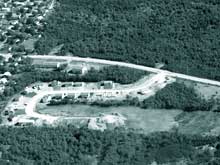 environmentalists in the us have been alarmed by a recent study of the us Forest Service that says the country's forests are being destroyed at a frightening pace by housing development projects. The study 'Forests on the Edge: Housing Development on America's Private Forests' says every day the country loses over 1,618 hectares (ha) of open space to development (over 1.2 ha per minute). "This rate is getting faster all the time," warns Dale Bosworth, chief of the us Forest Service.

Between 1982 and 1997, around 283,281 ha of forests made way for housing but the figure for the past five years is over 404,687 ha. The study predicts that the maximum impact of development projects will be on the country's south-eastern parts, housing three quarters of its private forests; adverse affects would also be seen in parts of the north-east, Pacific north-west and California.

The reason behind the devastation is clear: landowners see more money in developing greenfield sites than in managing them for timber or recreation. The impact is also clear: "In some places we are losing large, relatively undisturbed forests needed by animals like marten, bear and cougar. In others, we are losing rangeland that many plants and animals need," points out Bosworth. The rapid development also leads to pollution caused by building materials, which even seep into the groundwater. Besides, less forest cover means smaller reservoirs to harvest rainwater: the report warns that while forests provide almost a third of the country's freshwater now, the figure would decrease drastically with the disappearing wooded lands.