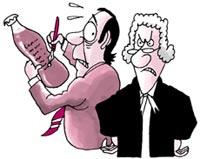 in a landmark judgement, the High Court (hc) of Rajasthan has directed soft drink majors PepsiCo and Coca-Cola to specify ingredients of their products and pesticide levels on their labels. The order applies to all manufacturers of carbonated beverages and soft drinks. It was issued on October 8, 2004, by the hc's Jaipur bench, in response to a public interest litigation (pil). When contacted for their response to the order, Coca-Cola India told Down To Earth (dte): Since we already publish ingredients details on our packaging and do not add pesticides, the judgement is unlikely to have any operational impact." Pepsi Foods Private Limited said they had applied for a copy of the order but were yet to receive it.

Chief Justice Anil Dev Singh and justice K S Rathore directed "the respondent companies namely PepsiCo and Coca-Cola, and all other manufacturers of carbonated beverages and soft drinks, to disclose the composition and contents of the products, including the presence, if any, of the pesticides and chemicals, on the bottle, package or container, as the case may be. The order has to be followed with immediate effect. Advocate Swati Bhati, who filed the pil in March 2003 on behalf of the Youth Welfare Society, Jaipur, says the court rejected cola companies' application to delay the order's implementation by two months.
The court rejected all the arguments of the cola majors. "The learned counsel for the respondent companies submitted that the companies are not required under law to disclose the presence or absence of pesticides in their products...According to them in case water contains pesticides, they cannot be blamed for it...Both the counsel for Coca-Cola and PepsiCo submitted that small traces of ddt and other pesticides are not harmful to the health of the consumers," reads the order. The court referred to the August 2003 report of the Centre for Science and Environment (cse) that exposed pesticide residues in major soft drink brands sold in the open market (see dte, 'Colonisation's Dirty Dozen', August 15, 2004, p 31). It also considered findings of the Joint Parliamentary Committee set up to investigate the issue (see DTE, 'A lie in nailed', February 29, 2004)."There is no manner of doubt that the analysis by the cse and by other laboratories show the presence of pesticides in the samples of branded products of PepsiCo and Coca-Cola," the judges ruled.
Once it was clear that they couldn't contest the presence of pesticides in soft drinks, the cola companies harped on their 'trace' theory. "Negligible traces of pesticide residues have been found in the samples and they are not harmful to the health of the consumers," argued Sandeep Sethi, senior counsel for PespiCo, citing N G K Karanth, deputy director and head, Food Protectants and Infestation Control, Central Food Technological Research Institute, Mysore, Karnataka. According to Sethi, Karanth had said that only hundreds of years of consistent exposure to these pesticides could cause cancer and other maladies. But the court wasn't convinced. It ruled that Karanth had admitted that even "small quantities of pesticide in a soft drink are not good".

The cola companies also contended that pesticide residue was not an intentional additive but an "incidental contaminant" from the raw material. They questioned the validity of restricting "the sale and consumption of beverages containing pesticides" when there was no restriction on pesticides in water. The court held that while water was a necessity for survival, soft drinks were mere products of trade and commerce, sold at a price: "Once a person pays for a commercial product it must be totally safe."
The hc said consumers have a fundamental right to know the entire content of carbonated beverages. It cited various Supreme Court (sc) orders and concluded:... right to know is a necessary ingredient of participatory democracy and the same springs from Article 19 (1)(a) and Article 21 of the Constitution." Absence of complete information prevents consumers from forming an "informed opinion" about whether or not to buy the product, it said. It also rejected pleas by the companies that disclosure of contents would cause a panic in the market and reduce their business. "Commercial interests are subservient to the fundamental right, it said.

Bhati says her clients have filed a caveat, anticipating that the companies will approach the sc.