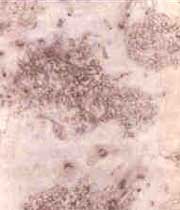 WHILE localised prostate cancer is not fatal, its metastatic spread - occurrence or development of secondary foci of cancer at a distance from the primary site - is invariably fatal. Researchers have long been plagued by the question - what dictates molecular changes in metastatic prostate cancer making it life-threatening? Now, the discovery of a gene that appears to suppress prostate cancer metastasis offers hope of checking the cancerous spread (Science, Vol 268, No 5212).

A team of researchers led by Carl Barrett of the National Institute of Environmental Health Sciences in North Carolina, USA, and John Isaacs of the us-based Johns Hopkins University School of Medicine has identified a metastasis-suppressor gene named kang ai I (KALl) in rat cells. It is reported that decreased activity of this gene contributes to making some prostate can- cers fatal by allowing them to metastasise in animals.

Metastasis requires cells to break away from the primary tumour, travel through the circulatory system and attack distant organs where new tumours ar@ formed. Barrett, Isaacs and their colleagues discovered that prostate cancer cells lacking the KAI I protein migrate better than cells with large amounts of it. "The gene affects the invasive ability of cells," says Isaacs, thus indicating that cells lacking the gene are prone to spread the cancer in the patient's body.

Although scientists began their search in rat cells, there is primary evidence that inactivating KAI I may also contribute to metastasis of human prostate cancer cells. Gene transfer experiments revealed that KAI I is just as effective at reducing metastatic properties as chromosome 11 in humans, which shows metastasis suppressor activity in other types of cancers. Preliminary results indicated lower expression of KAL1 in metastatic prostate cancer cells of humans than in normal prostate cells, thus confirming that inactivating this gene leads to metastasis of this kind.

Meanwhile, other markers for metastatic prostate turnours have also been identified. Some iesearchers, including William Isaacs and Jack Schalken, suggest conclusively that loss of a cell adhesion molecule called cadherin E, also influences prostate cancer metastasis. Moreover, Barrett and his colleagues have discovered that human chromosomes 8, 10, 16 and 17 suppress metastasis by the rat prostate cancer cells. The team is now trying to identify the genes responsible for checking the spread of cancer. Besides, pathologist Gary Miller of the University of Colorado Health Sciences Centre feels that host characteristics like age, immune status or nutrition may also influence the metastasis process in turnour cells.

Even as these additional factors are put forth, KAI1 has already found some acceptance as a true metastasis suppressor gene in prostate cancer cells. "What has been presented already is a substantial body of evidence," declares Patricia Steeg of the US-based National Cancer Institute.

Researchers estimated that 80 per cent of men with small prostate turnours don't need any therapy, 10 per cent need surgery to remove these and the remaining 10 per cent have metastasis process set in at the time of diagnosis, rendering them fit for advanced hormonal and gene therapies. While these 3 groups of patients cannot be sorted out using current technologies, KAI I promises to solve this clinical dilemma.

Future plans of researchers include the determination Of KAI I's effects on other types of cancer, Experiments will be conducted where the gene will be introduced in other kinds of cancer cells and their subsequent behaviour noted. In addition, scientists are making antibodies to the KAI I protein which will be employed to estimate its levels in prostate cancers removed from patients. This will help ascertain the theory that patients with decreased levels of the KAI I protein have worse survival chances than those with higher levels.

As research proceeds to reveal more about prostate cancer and its treatment, discovery of KAI I would always stand out as a fundamental advance in this direction.