Conflicts are no less around national parks, sanctuaries 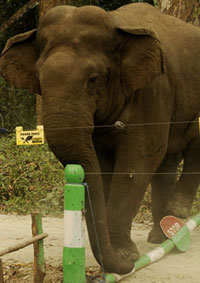 Are human-elephant conflicts less around protected areas like national parks and wildlife sanctuaries and more near non-protected areas? Are physical barriers like electric fences and elephant- proof trenches enough to reduce conflicts between human and elephants? The answer is “no” in both instances, according to a study by a group of ecologists led by Sanjay Gubbi of Nature Conservation Foundation, Bengaluru.

The study in Karnataka to map the distribution of state-wide human- elephant conflicts was the first of its kind in the country. Despite the fact that human-elephant conflict is a serious conservation and social issue, there has been little quantitative understanding of conflict, especially over large areas, points out Gubbi.

The protected and the non-protected

Among the southern states, Karnataka is home to about 6,200 elephants, perhaps the single largest population of Asian elephants anywhere in the world. The state has a total area of 191,791 sq km and has 33,238.47 sq km of forests (17.33 per cent). Elephants are largely concentrated in 12 forest divisions legally protected as national parks or wildlife sanctuaries such as Bandipur, Nagarahole and Bannerghatta, and 13 forest divisions outside the protected area. While the protected area (PA) forest divisions are almost fully covered with forests (with pockets of human habitations in some PAs), only parts of non-PA divisions have forest cover and largely comprise human dominated landscapes (cities, villages, agricultural and horticultural fields). 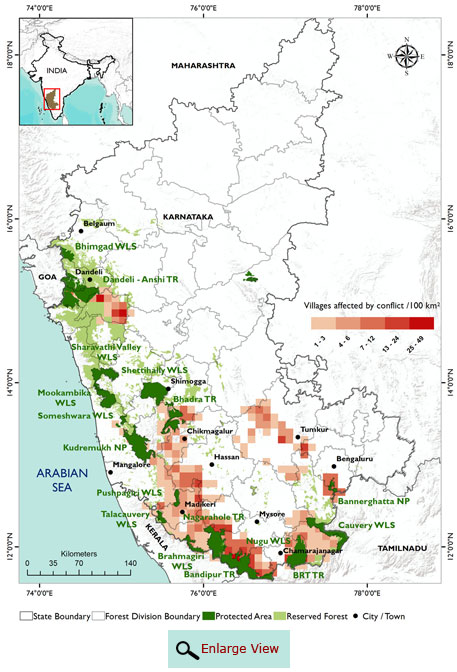 The study analysed data of crop raiding by elephants, compensation paid and and the length of physical barriers per unit area of the forest division for a three-year period between April 2008 and March 2011. During this period, 60,939 incidents of crop loss were reported and Rs 13,89,04,778  was paid in compensation; 91 people were killed by elephants and 101 elephants died in retaliatory killings. A total of 9.4 per cent of the state’s geographic area, covering 25 of the 42 forest administrative divisions, were affected by human-elephant conflicts.

Comparison of conflict data for protected and non-protected areas is very important as PAs receive higher funding for protection, conflict mitigation, establishment of physical barriers, fire protection and habitat improvement activities. “Interestingly, we found no correlation between human- elephant conflict and the elephant density in the forest divisions, forest area in a division, length of physical barriers per unit area and perimeter of the boundaries of the Protected Areas,” says Gubbi. The number of  villages affected by the conflict and the compensation paid by the government was almost the same around protected areas and non-protected areas.

For instance, in Bandipur National Park, a protected area with about 872.24 sq km of forests and an elephant density of 2.4 per sq km, 170 villages were affected by human-elephant conflicts. The compensation paid by the government was Rs 2,67,12,937. In Hassan, a non-protected area with 516 sq km forests and an elephant density of only 0.3, the number of villages affected was 105 and the compensation paid was Rs 2,10,56,156.

“The physical barriers need to be appropriately planned and managed. This would not only help in reduction of expenditure to the government but also allow free movement of elephants, making physical barriers an important part of the solution,” says Gubbi.

The study has also revealed that the conflict is higher in the southern part of Western Ghats and south-eastern forests of MM Hills, Cauvery and Bannerghatta. Interestingly, elephant conflict is almost absent in the central Western Ghats region which is known to have elephant habitats. “The absence of conflict is because of disappearance of elephants from these areas. This calls for serious attention to address the factors that have driven elephants out of the area. “Conserving and reconnecting elephant habitats between various PAs, wherever it is ecologically and socially feasible, is of prime importance,” observes the study which was published last month in the International Journal Biodiversity Conservation.