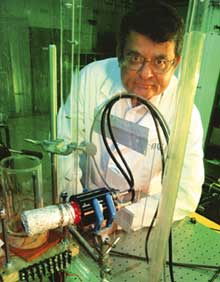 the claim by an India-born nuclear scientist of achieving nuclear fusion the reaction that fuels the sun in a laboratory has landed him in a controversy, with his peers reporting they could not replicate the experiment.

Rusi Taleyarkhan, a professor of nuclear engineering at Purdue University, usa, shot to fame when a research team he led reported tabletop fusion in a 2002 issue of Science journal (see 'Impossible is possible', Down To Earth, March 31, 2002).

The claim is based on a little-understood process. Scientists have long known that high frequency sound waves cause the formation of bubbles in liquids. When they burst, they produce high energy that can, for a fraction of a second, produce a tiny flickering hot spot -- called sonoluminescence. This 'star in a jar' reaches temperatures greater than those prevailing on the surface of the sun. Such extreme temperatures can be used to meld two or more atomic nuclei, which, in turn, would release phenomenal energy.

However, many scientists who have tried to replicate the experiment say they have not seen any signs of fusion. The web site of the journal Nature reported on March 7 that several faculty members at Purdue, including Lefteri Tsoukalas, the head of the School of Nuclear Engineering who hired Taleyarkhan from the Oak Ridge National Laboratory in Tennessee in 2003, now doubt the finding.

So does University of California Los Angeles (ucl) graduate Brian Naranjo. He found that the pattern of particles emitted in the experiment did not match that expected for fusion, but instead appeared to be characteristic of californium, a radioactive element, which seemed to be present in Taleyarkhan's laboratory. If californium is stored improperly, it can give false readings, he argued.

The Purdue University authorities have ordered a review of the experiment. A university spokesperson quoted provost Sally Mason as saying there is disagreement within the scientific community both here and elsewhere concerning this research. The review, by three experts, will go on till June and the findings will be made public. Taleyarkhan, who graduated from the Indian Institute of Technology Madras, said he stands by his experiment.

The us department of energy, of which Oak Ridge lab is a part, had applied for a patent for Taleyarkhan's bubble-fusion device in 2003. But it was withdrawn in December last year.