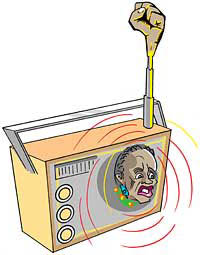 A group of rural women have launched a community radio station in Democratic Republic of Congo's South Kivu province. Radio Babusa FM will take up women and child welfare issues.

An initiative of the women's group Sauti ya Mwanamke Kijijini (samwaki), Radio Babusi will broadcast in the local language Mashi, Swahili and French. The organization believed that the radio can be used to break the silence around issues such as the discrimination and marginalization faced by rural women and to empower village women to be agents of sustainable development. It will also be a tool for forging alliances with other members of the community to seek commonly agreed solutions to the problems facing women, a spokesperson of samwaki said.