Connecting those who matter 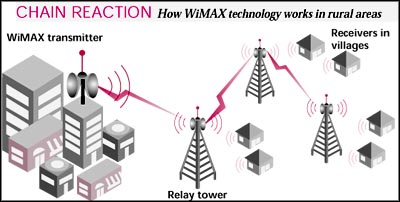 rural India has largely missed out on the benefits of the 'information age'. But developers of a new wireless technology, wimax, say their know-how can cost-effectively bring high-speed internet services to rural areas. With backers like Intel Corporation and Fujitsu, the technology is promising. But Indian companies seem to be intent on introducing the technology in only urban markets.

Telecommunications companies have always said that it is too expensive to lay high-speed internet cables in villages because the profits are much lesser than the expenses. Both wimax and its predecessor wi-fi use radio waves to broadcast internet signals, thus removing the need to use cables. However, whereas wi-fi could only broadcast signals up to a hundred meters away from the transmission towers, wimax technology can transmit signals up to three kilometers away and it supports speeds five times faster than what its counterpart (wi-fi) does.

Reliance Infocomm Limited, Sify Limited and Tata Teleservices Limited -- the leading telecom players of India -- are part of the wimax Forum, a global consortium of companies involved in promoting the technology. These companies are planning to start pilot trials of wimax in India very soon. Ironically, plans about the tests have not been made public. Are any trials planned for villages too?

A few companies, such as Chennai-based n-Logue Communications Private Limited, have endeavoured to bring in the information revolution to rural India. n-Logue has set up kiosks providing internet services in several villages of Gujarat, Maharashtra and Tamil Nadu. Villagers have used this service to get medical consultations and establish a link with agricultural experts.

More such projects are required to make the villagers realise the benefits of the internet, thereby generating demand. Experts hope that rural India might make it to the telecommunications industry's agenda by 2005, when wimax will be launched in the market.