Conservation in a cocoon 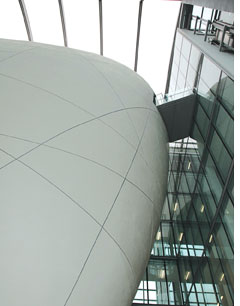 London's Natural History Museum has revealed its iconic new wing to the world. Called the Darwin Centre Phase Two, an eight-storey "Cocoon", encased inside a glass atrium, it has been designed to conserve about 28 million insects and 6 million plant specimens, ranging from the historic original cocoa plant (brought from Jamaica in 1639) to species collected by Charles Darwin in his Beagle voyage (1831). To ensure their longevity and safeguard them from pests, particularly the 'museum beetles' or carpet beetles, the 30-cm thick cocoon has been wrapped in fine silk and the temperature and humidity of the atrium are being maintained at 17C and 45 per cent respectively. The new wing is a scientific research facility housing 200 staff and visiting researchers from 70 affiliated countries, working at classifying species via a technique named 'DNA barcoding'.

Understanding the physiology of these species will help scientists tackle urgent ecological problems, such as how climate change is affecting biodiversity, pest control and warding off global food crisis.