Asia to have its first cross-country linkages of fragmented habitats 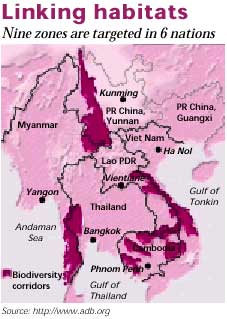 The six Asian countries sharing the Lancang-Mekong river have agreed to build biodiversity conservation corridors in its basin -- the first in the continent. The initiative taken by Cambodia, Lao- pdr, Myanmar, China, Thailand and Vietnam, could be a blessing for wildlife in the highly fragmented habitats in the Greater Mekong Subregion (gms). Such linkages help maintain biodiversity by allowing not only animals to move between isolated natural areas but also by aiding pollination of plants, according to a study published in Science (Vol 309, No 5731, July 1, 2005) .

The decision was taken at the second gms summit of the six countries held from July 4-5, 2005, at Kunming, the capital of southwest China's Yunnan Province. "Environmental conservation and sustainable management and use of shared natural resources in the Mekong river basin are vital to the sustainable development in gms," said the summit declaration. Earlier, in May, environment ministers from gms countries adopted the Biodiversity Conservation Corridor Initiative (bcci) and pledged to build the corridors within a decade. The initiative will be implemented in nine zones within gms and include as many as 55 protected areas (see box : Common heritage).

"It is a timely and necessary initiative," said Liqun Jin, vice president of the Asian Development Bank (adb), which is partly funding bcci. "Habitat fragmentation, mainly caused by rapid economic development, poses a growing threat to the rich animal and plant diversity in the gms," he added. But the damage has already been done. Since 1992, adb has been a key player in economic development of the gms. Construction of large dams, transnational roads, railways and other infrastructure projects has fragmented wildlife habitats and also displaced thousands of people.

The corridor zones in each gms country tend to fall in the least populated locations, which face high poverty and immigration. In the bcci Strategic Framework and Technical Assessment Report, adb notes, "the large infrastructure projects forced people to move to remote areas, as remote areas work as a refuge for displaced communities and 'last resort' employer for the poor". With bcci, the six countries expect to improve livelihood of poor people living in and around forests in biodiversity corridors. bcci proposes to establish "land management and governance regimes that will provide incentives to responsible and sustainable management and maintenance of natural resources". Says Kamal Bawa, professor of biological sciences at University of Massachusetts in the us, "Shared concern for biodiversity may foster joint action and development of common plans, in the process bringing people together in the pursuit of common goals."

Threats to biodiversity and natural resources in gms come mainly from large hydroelectric projects and transnational roads. Construction of transnational roads increases vulnerability of forests and wildlife not only by bisecting important conservation areas but also by creating barriers to dispersal and movement of species. Increased fertiliser use in agriculture and run-off has affected the region's waterbodies. Unregulated logging and shifting cultivation is reducing primary and secondary forest cover.

Another major threat is hunting -- both for local consumption and for illegal trade. Apart from the big mammals -- tigers, leopards and elephants -- Burmese pythons, star tortoises and birds are also sold illegally. Increase in illegal trade in wild animals and other forest products is seen as a result of growing income disparities between rural and urban residents and lack of transboundary cooperation. For instance, while China patrols the border areas between Yunnan Province and Lao- pdr and Myanmar to check the illegal wildlife trade, similar efforts lack on the other side of the border.

Healthy natural systems also provide valuable resources for humans. But fisheries and other ecosystem services -- the key to gsm economic development -- are already on the decline.


A big challenge for bcci, which will be implemented in three phases by 2014, is to mobilise the requisite financial resources. The total cost in phase one (2005-2008) is estimated to be us$10.9 million. adb will provide grants of around us$1.5 million to each member country for phase one but it's not clear where funds will come from for phase two (2009-2011) and phase three (2012-2014). adb is expected to offer loans to some countries for phase two, according to wwf -Thailand. Meanwhile, Thailand has committed substantial funds to cover government costs while China plans to set up a us$20 million Trust Fund for poverty reduction with the adb under bcci.

To bring synergy in funding and action, bcci will promote collaboration with and between non-governmental organisations working in the region. The May meeting of gms environment ministers proposed to establish a system of payment for the private sector for environmental services that could form a basis for sustainable financing of bcci. Besides contributions from gms countries, funds will be raised from the public and private sectors. bcci will also provide an opportunity for carbon trading to the private sector.

The political and economic condition of gms countries will also be crucial to bcci 's success. "Indeed there are tremendous difficulties in reaching and implementing transboundary agreements because of economic and political differences among countries. On the other hand, transboundary agreements may be viewed as a first step in overcoming such differences," says Bawa. The region's common need of sustainable development and poverty alleviation could be a major driving force behind transboundary cooperation. "Any conservation plan and action if implemented in one part of the range of distribution of species cannot be effective," he added. There are several transboundary biodiversity corridors around the globe (see box: Showing the way). These corridors present successful examples of biodiversity conservation. Some projects, however, have generated conflict and protests because of their failure to address the needs of local people. For bcci to be truly successful, both pro-poor and pro-biodiversity conservation interventions are a must.