What is good for Olive Ridley turtles is bad for fishers 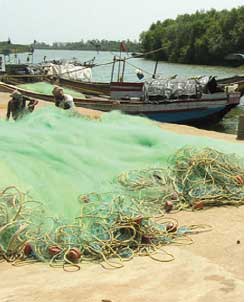 a seven-month fishing ban imposed by the Orissa government near the coast, from the Dhamra river mouth to the Rishikulya river mouth, has angered fishers. The ban has dried up their income and they have no other means of earning a living.

The ban effective from November to May is meant to protect Olive Ridley turtles that mate in the coastal waters and nest on the beaches along the 120 km shoreline, including Gahirmatha beach. This ban is in addition to the complete ban on fishing in the Gahirmatha marine sanctuary at all times of the year after it was notified as a protected area in 1997.

Fishermen said the ban is irrational. How can fishermen survive if you put such a large area of the sea out of bounds? asked Narayan Haldar, president of Orissa Traditional Fish Workers Union. The ban affects fishermen living in five districtsKendrapara, Jagatsinghpur, Puri, Ganjam and Bhadrak.Anga Kalia, of Nolia Nuagaon village in Ganjam district, said the government should try to identify specific areas of turtle congregation so that the banned area can be reduced. Rajnagar district forest officer, Prasanna Kumar Behera, said the demand for reducing the ban area is not justified as turtles congregate in a large area. The ban, imposed by the government for the past six years, allows paddle boats but Haldar said this concession is meaningless and at least small engine craft should be allowed.