It took just five votes to shake the very edifice of the International Whaling Commission (IWC). Voting 25-20 in favour of setting up a controversial committee, the North-dominated anti-whaling faction drastically altered the IWC mandate -- from that of scientific sustainability to hardcore conservation 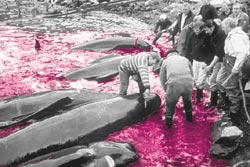 It took just five votes to shake the very edifice of the International Whaling Commission (iwc). Voting 25-20 in favour of setting up a controversial committee, the North-dominated anti-whaling faction drastically altered the iwc mandate -- from that of scientific sustainability to hardcore conservation. The dramatic development, during the iwc's 55th annual meeting in Berlin, Germany, led whaling nations such as Japan, Iceland and Norway to threaten withdrawal from the commission and affiliation with a separate umbrella organisation.

As many as 17 member countries issued a joint statement after the acrimonious June 13 to 19 meeting, opposing the formation of the contentious Conservation Committee. They dubbed it as "an attempt to change the fundamental objectives" of the International Convention for the Regulation of Whaling and a bid to "subvert the purpose" of the iwc. "Establishing (such) a ... committee will essentially destroy the already polarised and dysfunctional iwc," they observed.

The conservation panel plan was a part of a set of proposals, which were collectively referred to as the Berlin Initiative. Anti-whaling groups like the World Wildlife Fund (wwf) mooted the idea and countries such as Australia, New Zealand, Mexico and the us endorsed it.

The Conservation Committee is authorised to:

• Explore how the iwc can coordinate its activities with the World Conservation Union (iucn), Convention on International Trade in Endangered Species (cites) and other similar bodies

The reaction of Susan Lieberman, who led the wwf delegation, was along expected lines. "This is a historic day for cetacean conservation," she gushed. Australia's environment minister, David Kemp, made no bones about the fact that the Berlin Initiative sought to change the scope of the whaling commission. He described the proposals as "a milestone in the evolution of the iwc". Expressing his views on the body's de facto shift in stance over the past few decades, he opined that the "transition should be consolidated".

Equally predictably, the mood in the rival camp was sombre. "The initiative undermines iwc's unfinished task of completing the framework for resumption of sustainable commercial whaling under the Revised Management Scheme (rms)," lamented Japan's whaling commissioner, Minoru Morimoto. The country believes that while endangered whale species should be protected, the restrictions should not cover others like the minke whale -- whose current population stands at more than one million. Though Japan stopped commercial whaling in 1986 in accordance with a temporary iwc ban, it continues to take out about 700 whales each year in what it prefers to call scientific research whaling. The country, after initially indicating that it was ready to pull out of the commission, toned down its position later. Japanese Prime Minister Junichiro Koizumi felt that the country should seek support within the iwc for its bid to recommence commercial whaling.

Meanwhile, several experts echo Minoru's apprehensions. They point out that the commission's Scientific Committee has been working for a long time to chalk out a plan to harvest whales sustainably. Now, with the iwc being forced to follow a rigid conservationist agenda, the proposal will not come to fruition, they fear. This despite its being nearly ready for implementation in the case of some whale species.

Upset at the turn of events, the Japanese, Norwegian and Icelandic governments are unlikely to fund the Conservation Committee. But critics feel that even scarce funds could be diverted towards protection-related work. They are also worried that the coalition of about 40 non-governmental organisations (ngos), which has lobbied hard for the Berlin Initiative, will contribute handsomely to the Trust Fund. The pressure groups include Greenpeace, wwf and International Fund for Animal Welfare Charitable Trust.

Milton Freeman, editor of INWR Digest (the newsletter of the International Network for Whaling Research), avers: "The iwc's credibility is already under a cloud so far as bodies like cites and Food and Agriculture Organization are concerned. Having to rely on funding from various eco-terrorist and radical animal protection organisations will hardly redeem its image."


Even as Japan and other whaling nations suffered a major reverse vis--vis the conservation panel, they did succeed in thwarting the other side on some fronts. For instance, the proposals to establish sanctuaries in the South Atlantic and South Pacific to complement existing ones in the Indian Ocean and Southern Ocean were rejected. Both plans had the approval of the majority of member nations, but failed to get the three-quarters support required.

New Zealand -- co-sponsors of the South Pacific sanctuary for the fourth consecutive year -- exuded optimism, though it was disappointed that the Caribbean countries did not back the move. It may be noted that whaling Caribbean nations have come to play a significant role in the voting process (see box on previous page: Racial slur).

The wider battle between the two warring factions in the iwc has been reduced to a numbers game. They realise that even a simple majority can influence the commission's agenda. Consequently, the groups are now keen to enlist the help of similarly inclined nations by urging them to hop on board. "We have to encourage countries committed to the cause of whales to join the commission," asserts New Zealand's conservation minister, Chris Carter.


"The anti-whaling bloc, including Australia, New Zealand, Mexico, Italy and the us, has worked overtime to ensure that the scales are tilted in its favour and the sustainable use camp is pushed into a tight corner," observes Eugene Lapointe, president of the Geneva-based World Conservation Trust. "The latter are being compelled to establish an alternative pro-whaling forum that would promulgate an rms for the regulated harvesting of abundant whale species and recommence commercial whaling," he opines.

Indeed, the World Council of Whalers -- a global association of commercial whalers -- has called for a new organisation to manage and regulate commercial hunting of abundant whale populations. "There seems to be no room left for any compromise to pave the way for the orderly development of sustainable commercial whaling," says the founding chairperson of the council, Tom Mexsis Happynook, in Canada.

Among the softer options being mentioned is that of whaling under regional management organisations. Norway and Iceland belong to an alternative body called the North Atlantic Marine Mammal Commission (nammco). This organisation could invite the six Caribbean whaling nations, which collectively comprise the Eastern Caribbean Cetacean Commission, to join it. Japan, though, is still some way from being part of a North Pacific equivalent of nammco. At present, it is engaged in regional discussions with China, Russia and South Korea on whale research and related issues.

"The brave defenders of the global theme park will huff and puff initially, threatening to slap economic sanctions on sustainable use nations that may break away from the commission. It will, however, amount to nothing but bluster. There is not a single eu member willing to make the smallest financial sacrifice for any whale, endangered or not," notes Lapointe sceptically.

In Freeman's opinion, the situation will unfold thus: "The whaling countries may, for the time being, stay on in the iwc so that they can register legal objections to any unreasonable protection measures. If Japan, Iceland and Norway agree to act in unison, they could bring back a semblance of rationality in the iwc. Any reforming coalition is more likely to arise from the whaling countries working together with the few moderate anti-whaling nations. The latter may comprehend the damage being done to international relations by the hardline group and climb down." This, Freeman thinks, is the only way out.

Whether or not it actually happens will decide whether the iwc stays afloat or goes adrift.