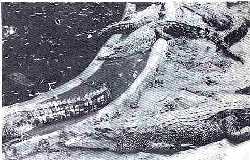 Environmentalists in favour of sustainable utilisation of wildlife have once more stepped up their campaign. In a letter to the Union environment ministry, herpetologist Romulus Whitaker reiterated his demand for the commercial exploitation of crocodiles, which are overcrowding his crocodile bank near Madras.

Pointing out that crocodiles are no longer an endangered species, Whitaker said he would like to sell the skin and meat of his crocodiles. Breeding has been stopped on his farm because, with the 10,000 crocodiles already present, "it is a jam and this year we left some 5,000 eggs in the sun without hatching them", says Whitaker.

Exhorting animal rights activists to be realistic, Whitaker says, "Wildlife preservation has to have some economic value if it is to make sense to the ordinary man." He recommends that the snake- and rat-catching Irula tribals of Tamil Nadu should undertake crocodile farming and culling under government supervision and later sell the skin in the export market. "There is no harm in exploiting any animal provided you know how to breed that animal," says Whitaker, who is now awaiting Union government clearance for his radical conservation and marketing proposal.